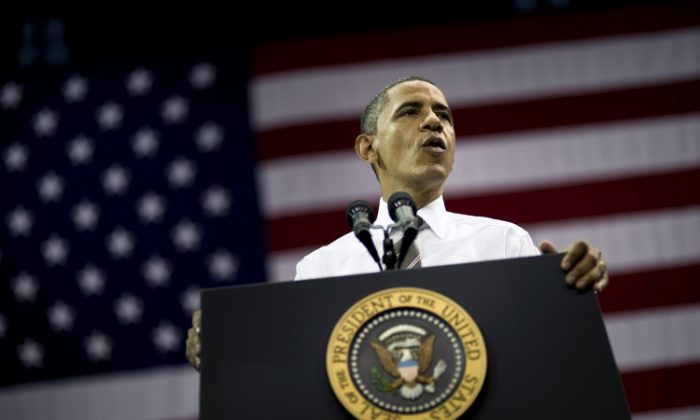 President Barack Obama on Tuesday spoke to a group of students at the University of North Carolina about the potential of student loan interest rates doubling this summer. (Brendan Smialowksi/AFP/Getty Images)
Business

Student Loans and the Repayment Dilemma

Lately, much media hype has centered on student loan default rates, with most articles using the same statistical information. The U.S. Department of Education (ED) published the data used most often, followed by data from the U.S. Federal Reserve Bank of New York.

“These hard economic times have made it even more difficult for student borrowers to repay their loans,” said Arne Duncan, U.S. Secretary of Education, in ED’s statement.

The Federal Reserve Bank of New York suggests in a March statement that 5.4 million former students or 14.4 percent of student loan borrowers are in default, totaling about 10 percent or $85 billion of the total outstanding loans.

However, the Federal Reserve qualifies its numbers stating, “Some special accounting used for student loans, not applicable to other types of consumer debt, makes it likely that the delinquency rates for student loans are understated.”

Student Loans in a Nutshell

In the 2010–11 academic year, the federal government extended $227.2 billion in student loans, while another $7.9 billion was paid out by state, private, and other types of aid programs. The total amount of student loans extended reached $235.1 billion versus $222.8 billion during the 2009–10 academic year.

By the end of 2011, the total outstanding student loan debt had reached $865 billion. Total borrowing has increased by 57 percent per student over the last decade, according to the Consumer Financial Protection Bureau (CFPB) Semi-Annual Report, dated July 21–Dec. 31, 2011, released on Jan. 30.

“Of loans outstanding in 2011, approximately 90 percent are federally-supplied and 10 percent are from private sector lenders. Originations of private student loans have been declining, from a ten-year high of $22 billion in 2007 to $6 billion in 2010,” according to the CFPB report.

At 6 p.m. on April 24, the Student Loan Debt Clock had reached an estimated $994.9 billion for federal and private loans outstanding.

“Total student loan debt is increasing at a rate of about $2,853.88 per second,” according to an entry on the FinAid website.

“Evidence is mounting that student loans could be the next trouble spot for lenders,” according to Dr. Andrew Jennings, chief analytics officer at credit report company FICO, in a February National Association of Consumer Bankruptcy Attorneys (NACBA) report.

Since 2005, borrowing by parents of college-bound kids increased by 75 percent. The major problem is the hard economic times. Many people have lost their jobs and are not finding another job. Other parents are nearing retirement and thus no longer have the ability to pay back those loans.

Attorneys in the report suggest that there are signs similar to those that heralded the mortgage crisis, and the collapse is just around the corner.

“Just as the housing bubble created a mortgage debt ‘overhang’ that absorbs the income of consumers and renders them unable to afford to engage in the consumer spending that sustains a growing economy, so too are student loans beginning to have the same effect, which will be a drag on the economy for the foreseeable future,” the NACBA report said.

No Jobs to Repay Student Loans

“Students, many of them adults looking to gain new skills, are being systematically ripped off and enslaved by schools and lenders, blinding them with hope about what a higher education can do for them while bilking them for billions in the process,” said Shah Gilani on his Wall Street Insights & Indictments website.

Gilani suggests that the Federal Reserve total outstanding loans at $870 billion are a whitewash, as the numbers don’t include unpaid interest on delinquent loans.

The fact is that unemployment is very high, with the majority of unemployed among those under the age of 25, according to the Bureau of Labor Statistics.

“Schools are enticing students, and increasingly adult students, to borrow to advance their employment prospects. What they don’t tell them is that they’re going to be enslaved by the debt burden they take on,” Gilani said.

Taking a Peek at the Federal Student Loan Program

“To qualify for Federal aid, the law requires that most for-profit programs and certificate programs at nonprofit and public institutions prepare students for gainful employment in a recognized occupation,” according to a June 2011 statement on the ED website.

ED states that the 2011 federal regulations require a college to provide students with programs that will make them employable, or it will “risk losing access to Federal student aid.”

The regulations require that at least 35 percent of former students from a given college are paying down their loan, and the annual loan payment cannot be higher than 30 percent of the former student’s discretionary income.

Discretionary income is the amount left over after all expenses are paid and could be saved or used for recreational purposes.

“While many career college programs are helping to prepare America’s workforce for the jobs of the future, far too many students at these schools are taking on unsustainable debt in exchange for degrees and certificates that fail to help them get the jobs they need or were promised,” according to the ED statement.

A major tragedy is that the government has immense power when it comes to delinquent accounts. The government will ruin students’ credit records, making them unable to borrow in the future. Even in bankruptcy, a student loan can’t be discharged.

“The government can garnish your wages, take your tax refund, and grab your social security check, and it punishes defaulted borrowers by labeling them as if they had criminal judgments rendered against then [sic] in a court,” Gilani said.