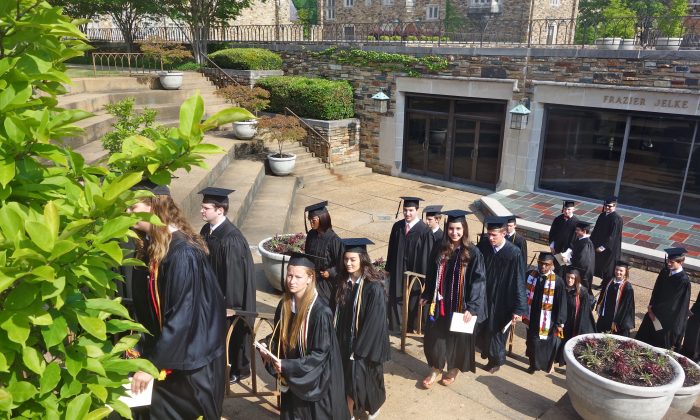 Students line up to graduate from Rhodes College in Memphis in May 2013. The federal interest rate for subsidized student loans doubled July 1. (Mary Silver/Epoch Times)
US

WASHINGTON—The federal Stafford Subsidized Student Loan interest rate doubled on July 1 from 3.4 percent to 6.8 percent, with some lawmakers attributing the increase to political a standstill.

A year after the temporary extension of the interest-rate-relief program, Congress has yet to pass comprehensive legislation to permanently address the federal student loan rate.

“We know the big numbers, 1.1 trillion in student loan debt now in the U.S. economy, more than credit cards, more than used cars. And yet we are standing here 12 days before the doubling of this rate.

“We are debating a bill that is right in the middle of polarized gridlock of politics that the American voters rejected soundly in the last election rather than dealing with the bread and butter issues that really matter to young Americans and middle class families all across the country,” said Rep. Joe Courtney (D-Conn.) on the floor of the House on June 18.

Other Democratic lawmakers accuse Republicans of allowing the Stafford loan rate to increase to raise revenue to reduce the deficit.

“Mr. Chairman, the Committee has not done right by the nation’s 7 million students who depend on these Federal student loans to go to college,” stated a letter from a group of Democratic lawmakers to the chairman of the Committee on Education and the Workforce.

The legislators were referring to H.R. 1911, which according to the letter, the nonpartisan Congressional Research Service found would cost students more than if student loan interest rates were allowed to double.

Student loan repayments are used to pay down the deficit, according the Congressional Budget office.

A number of bills have been introduced to tackle student debt in the year since the temporary extension.

Other lawmakers have proposed bills to extend the interest rate brake for four years; however, few have proposed legislation to broadly reform the federal student loan system, according to GovTrack.us.

Proposals include provisions to vary interest rates based on an individuals’ salary. H.R. 1911 would tie the interest rate to the 10-year Treasury rate.

The White House issued a statement that the president’s advisors would recommend that he veto HR. 1911 should it be presented to him. The White House statement called the bill the wrong approach.