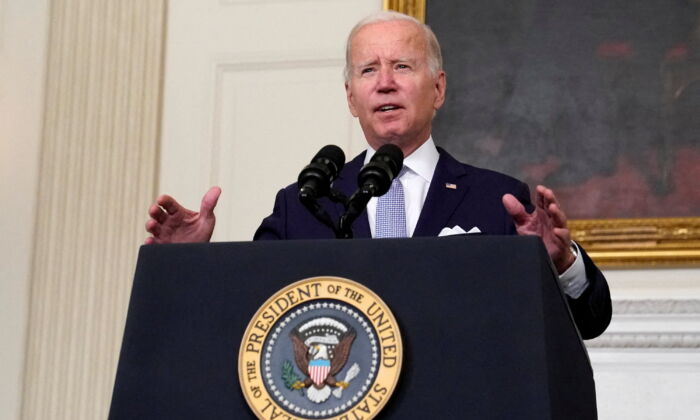 U.S. President Joe Biden gestures as he delivers remarks on the Inflation Reduction Act of 2022 at the White House on July 28, 2022. (Elizabeth Frantz/Reuters)
US News

A frequent critic of President Joe Biden’s handling of inflation, Summers renewed his warning on Monday as the federal government is expected to make a decision on student loan debt “within the next week or so.”

“Student loan debt relief is spending that raises demand and increases inflation,” explained Summers, who served as President Bill Clinton’s economy chief and a top economic adviser to President Barack Obama. “It consumes resources that could be better used helping those who did not, for whatever reason, have the chance to attend college. It will also tend to be inflationary by raising tuitions.”

“Every dollar spent on student loan relief is a dollar that could have gone to support those who don’t get the opportunity to go to college,” he added.

The comments come after Education Secretary Miguel Cardona confirmed on Sunday that his department is going to decide what to do with its $1.6 trillion student loan portfolio by the end of this month.

“I don’t have a decision for you today. But what I will tell you [is] that daily, we’re having conversations about this, and the American folks will hear it before the end of the month,” Cardona told CBS’ “Face the Nation.”

Biden had promised along his 2020 campaign trail to cancel $10,000 in student loan debt for every borrower. A vocal, progressive wing of Democrats continues to pressure the president to fulfill his pledge, although most Americans share Summers’s concern.

In a Momentive survey conducted on behalf of CNBC, 59 percent of respondents say they are “concerned” that canceling student loan debt will “make inflation worse,” with 34 percent saying they were “very concerned” about the negative impact on the economy.

The survey, conducted online from Aug. 4–15 among 5,142 adults, also found that 30 percent of respondents do not think anyone should get any student loan forgiveness, while 32 percent welcome a blanket discharge for all and 34 percent say loans should be forgiven for those in need.

The Education Department under Cardona has so far approved more than $32 billion in federal student loan discharges, including $13 billion for 1 million former students who claimed to be defrauded by for-profit colleges, $9.6 billion for some 175,000 borrowers through the Public Service Loan Forgiveness Program, and $9 billion for more than 425,000 borrowers who have severe disabilities.