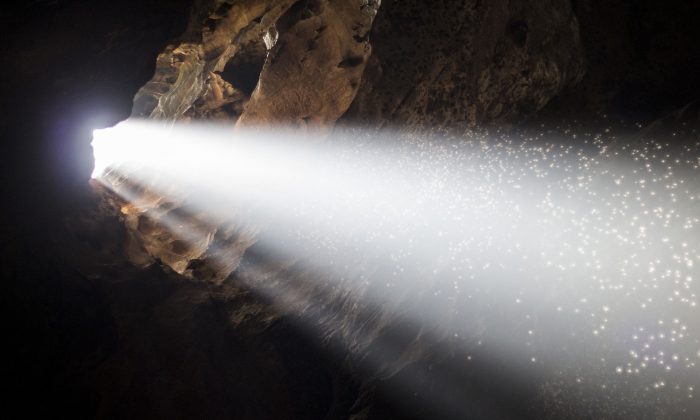 An Indiana University freshman spent about 60 hours in a cave with no food or water supplies, as his spelunking group left him behind locking the cave entrance on Sunday, Sept. 17.

As the thirst and hunger got to him, Lukas Cavar, 19, resorted to desperate measures. He licked the cave walls for moisture and even considered eating crickets.

He was rescued on Tuesday night.

After learning about the university’s caving club earlier this year, Cavar was among 11 students who, accompanied by one club leader, embarked for Sullivan Cave near Springville, Indiana.

They arrived at about 10:30 a.m. and split into two groups of six. To enter and exit the large cave one has to walk through the so-called backbreaker, a 2,000-foot passage with ceiling only 3-4 feet high.

After about three hours of exploring, the cavers were on their way out, and Cavar including the rest of the second group, walked further behind the first one.

“I thought, I’m not really enjoying this backbreaker part,” Cavar told Indiana Daily Student. “So I thought I’ll just see if I could bang it out.”

He hurried forward to meet up with the front group, but missed a narrow passage that led to the exit. When he realized that, he decided to wait until somebody found him. But nobody came for half an hour. When he eventually found his way to the exit, using graffiti arrows on the walls for orientation, it was 3 p.m. and the group had already left. The cave gate was padlocked.

There was no cellphone reception. He could hear cars passing on a nearby road. He screamed for help for hours. But no one came.

He was lightly dressed with knee and shoulder pads and a helmet with a light. But no food or water, only two empty water bottles, two energy bar wraps, and a plastic bag.

He found a paperclip in the cave, but it was no match for the lock. He started to panic.

“I was very confused and pretty scared,” he said. “It took me a little while to wrangle my emotions and sort of approach things analytically, sensibly, to come up with a game plan to survive.”

On Monday, hunger and thirst got to him. He spent hours licking the cave walls for moisture. He also wrote letters to his family on his phone before the battery died.

On Tuesday the cold got to him. He was considering eating crickets in the cave. In the end he curled into fetal position and waited.

Around midnight he thought he saw a light. Overcoming initial confusion, he came to the gate and saw the club leader approaching.

“The guy who locked me in the cave, who actually physically turned the lock, was the same guy who unlocked the cave and got me out, three days and three nights later,” Cavar said.

It is still unclear how it happened that Cavar was left behind and why it took nearly three days for somebody to come for him.

Keeping count of people is one of the basic rules of spelunking. The club has safety rules in place, but they failed.

“We have a series of rigorous protocols in place that are supposed to prevent situations like this, but they are only effective if followed,” the club’s president wrote in a statement. “We had a failure in our leadership to closely follow all these safety procedures. The risk that our member was exposed to as a result of these failures is a vivid reminder of why we have protocols.”

The university police were only notified of Cavar’s disappearance on Tuesday night, according to Indiana Daily Student.