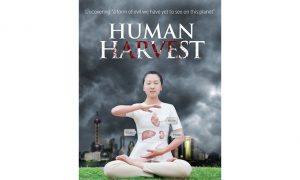 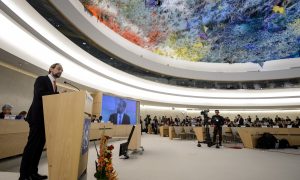 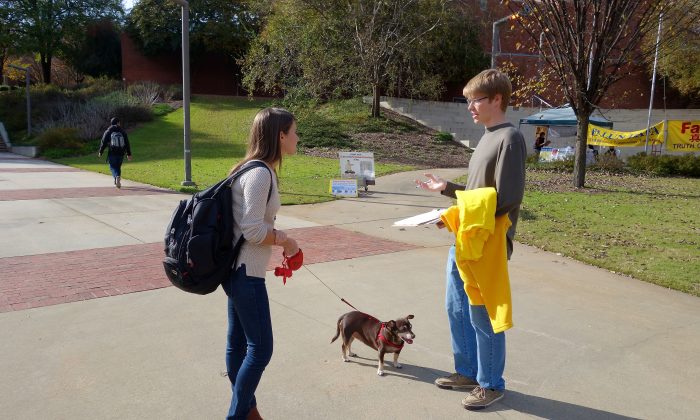 When 20-year-old John Perry began to practice Falun Gong in late May, he felt a duty to tell people about the danger other Falun Gong practitioners face in China. He looked online for a petition to share with his loved ones. “I was trying to find the most official one to get my family members to sign.” He chose one by the non-profit group Doctors Against Forced Organ Harvesting (DAFOH).

It calls on the United Nations High Commissioner for Human Rights to take “immediate action to end the unethical practice of forced organ harvesting from prisoners of conscience in China.” It also “calls for an end of the persecution of the spiritual group, Falun Gong, the primary victim of the forced organ harvesting,” according to the petition. The 2015 petition closed Nov. 30.

This will be the fourth year we are doing this petition,” wrote DAFOH spokesman Dr. Damon Noto, in an email. “In the past three years, we have collected roughly 2 million signatures. Yet there has been no official response from the UN High Commissioner’s office yet. However, many other government officials and offices have taken note of this huge response from the public. The initiative by students at the college level is really great. It demonstrates that people from all walks of life are appalled by the unethical practice of forced organ harvesting and want to see an end to this abuse.”

Perry is studying computer science at Georgia Tech University. He set out to tell everyone close to him about the crime against humanity the petition condemns. “I got my family members, then got all my friends. Everyone in my house signed the petition,” he said.

Then he widened his approach. He reserved space at Tech’s “free speech zone,” a paved area near the student center. He sent an email to other Falun Gong practitioners in Atlanta. They surprised him. “I got more than the response I was asking for. It really taught me a lot.”

It demonstrates that people from all walks of life are appalled by the unethical practice of forced organ harvesting and want to see an end to this abuse.
— Dr. Damon Noto, Doctors Against Forced Organ Harvesting

When he went back to school this fall, he thought he must spread the word about the communist regime’s human rights violations by himself. “I thought, there’s no one else to do it so I’ve got to do it.”

But support was always there for the asking. “Looking back, I realized how powerful it is to work together,” said Perry.

Two senior women from China were among his 14 helpers on Nov. 16 and 17. Neither speak English, but Perry reasoned that they could communicate with some of Tech’s many Chinese students. They did, smiling, and sometimes laying a grandmotherly hand on an arm.

If a person did not speak Mandarin, the aunties would signal a nearby English speaker to join the conversation. One student, with an Asian face, said, “I feel so bad, I can’t understand her.” He was born in America, and never learned Chinese, he said, though it is his heritage. He signed the petition.

“A lot of people who were walking by were like, ‘I support you,'” said Perry. “One guy almost yelled it. It was like he knew how important it was.”

A woman named Alicia was visiting campus from the small central Georgia town of Statesboro. She took a petition with her in order to collect signatures at home, said Perry. She said, “I’m so happy you guys are doing this.”

A tall African man wearing a suit did not hesitate. As soon as he heard about the petition, he said, “Of course,” and signed it.

Perry printed some facts about organ harvesting in China, to help the others answer questions from passers-by. He said he wanted to be sure they felt confident. One of the key facts is that China has no formal system of organ donation, yet organ transplants have increased exponentially since 1999. That is the year the communist regime began to persecute Falun Gong practitioners.

Most people supported the petition. A few rejected it. One Chinese man tried to argue with Perry. He disputed the facts about state—sponsored organ harvesting in China. He shouted. He cursed.

Perry kept a calm and friendly demeanor. “He seemed to be angry that we were out here,” said Perry. “It was hard to tell what he was angry at.” Perry said the man said he had written a report refuting reports of organ harvesting, and seemed to feel personally challenged when he saw people raising awareness about it. Perry told him, “We don’t have anything to gain from this. We have no reason to lie.”

“I remember one group of Chinese women, girls. I offered them a flyer. They kind of sneered at me,” said Perry. “I really need to do as much as I can.”

Perry will keep doing what he can. So will others. “Recently, many large media outlets including the New York Times and Yahoo have picked up the issue of forced organ harvesting in China. This is helping to break the silence on this abuse. It is also helping in calling for an independent investigation and complete transparent access to what has taken place over the past 10 years in China,” wrote Noto.