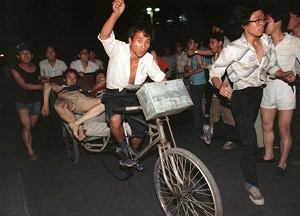 Two injured during the clash between the army and students, June 4, 1989 near Tiananmen Square are carried out by a cart. (Manuel Ceneta/AFP/Getty Images)
China

In the spring of 2006, a student club at a prestigious university in Shanghai City broadcasted a film on campus readdressing the 1989 June 4 Tiananmen Massacre. After the broadcast, the student club distributed pamphlets and setup a website. Over 100 people participated in this activity. An insider disclosed to The Epoch Times that this student club was likely to have been set up by students at either the Shanghai Jiao Tong University or Tongji University.

Somebody secretly reported the students' activity to the Chinese Communist officials. As a result, the next day, the president and the vice president of the club were arrested and the website was blocked. The parents of the two students went to school to see their children and complained with the student office. One day later, several students joined to express support, hoping that they will be released.

An insider said that the public security office has information that the student club obtained foreign financial support to organize this activity; pamphlets they distributed were also printed with this money.

When another student phoned the club president and vice president's home, their parents claimed that their children were traveling. It seems that the public security office had forced them to say so. No further details are available on this incident at present.