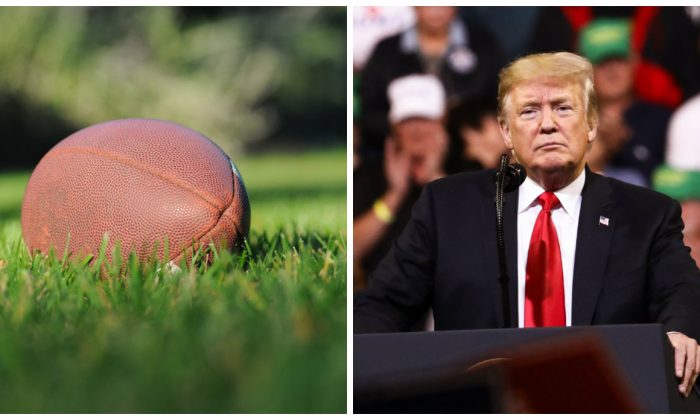 At a football game in North Carolina, an 18-year-old student was furious after the principal told him to remove a jersey that had on it 'Trump' and '45'. (L: Ben Hershey/Unsplash. R: Charlotte Cuthbertson/The Epoch Times)
US News

At a football game in North Carolina, an 18-year-old student said he was furious after the school principal told him to take off a shirt that had on it President Donald Trump’s name and the number 45.

Matthew Collins wore the Trump shirt to a Harnett Central High School football game in Angier on Oct. 5, where student attendees were asked to dress patriotically for “USA America” night.

Matthew said the school’s principal, Cindy Gordon, called him over at half time and asked him whether he had another shirt he could change into. Matthew said that the principal told him: “Parents are complaining about your shirt.”

A father tells me his son was asked by the school principal to remove this jersey during a patriotic-themed football game after people complained. Dad, a registered Democrat, says his son complied but felt humiliated. @HarnettCoSchool says it supports expression not disruptions pic.twitter.com/W9U9v2vBLF

In an interview with Big League Politics, Matthew recounted the situation: “I make the statement of ‘Why? He is the president of the United States and it is America Night.’ She responded with ‘It’s political.’ I came back at her with ‘How is it political? He is our president and it’s America Night.’ She then stated ‘change the shirt.’

“I then make the statement to Mrs Gordon that ‘if Obama’s name was on the back of this jersey, you wouldn’t have a problem with it.’ She froze up and honestly didn’t know what to say,” Matthew continued.

“She walked me to the gate and asked ‘if I payed’ because she was going to give me my money back. I said no and walked to my truck,” Matthew said. “At this point, I was so furious I almost had tears coming out.”

Matthew did remove his shirt, saying that it “was the only way I was getting back in.” But later he felt humiliated, and left with some friends.

“I 100 percent believe I was discriminated against, as well my first amendment right was violated,” he told Big League Politics. “There were many ways to handle this situation … She humiliated me and embarrassed me in front of everyone in that stadium.”

The Daily Record, a local paper, said Gordon has not responded to calls for comment.

“As long as the expression does not disrupt, and is not reasonably expected to disrupt, the educational mission of the school system, these rights include wearing clothing expressing political messages or supporting political candidates.”

Matthew’s father, a registered Democrat, said there was nothing disruptive about the shirt.

“I can assure you there was nothing about this shirt that was disruptive. I think we should stand up for our rights,” Mike Collins told WTVD.

“We don’t want any kids violated. We don’t want to see kids embarrassed over something like this,” Mike said. “He was not disrespectful. He was not acting in a manner that would cause attention to him.”

The father has since consulted an attorney over the matter but is not going to sue. He said several school board members have contacted him, and said they will handle the situation and make things right.

“We’re not promoting Donald Trump. He’s our president,” Mike said. “You’ve got to respect your president.”