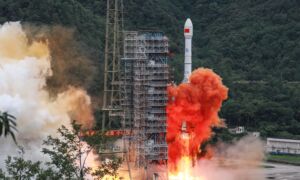 Student Dies as H1N1 Breaks Out in Beijing

A freshman from the Beijing University of Aeronautics and Astronautics (BUAA) died on Oct. 27 after being diagnosed with H1N1 influenza according to the Beijing Health Bureau. While official figures for infections in Beijing run at over 6,000, experts say it is only the tip of the iceberg.

Apparently the victim of an outbreak of H1N1 that occurred during a mandatory military training session for university freshmen on Oct. 22, the student was admitted to the district hospital in Beijing on Oct. 26 and died the next day, according to the Health Bureau’s report of Oct 28.

More than 3,000 BUAA freshmen participated in the training, of which 700 were reported to have been infected with H1N1. Over 400 recovered, while 300 still suffer flu-like symptoms, according to Deng Xiaohong, spokesperson for the Bureau who was quoted in a follow-up report by Beijing Youth Daily on Oct. 31.

According to the report, about 1,000 students had already left the training facility, and more than 2,000 were still under quarantine there.

Elsewhere, major hospitals in Beijing were inundated city-wide with an influx of students with flu-like symptoms and fevers.

More than 6,000 Beijing residents had sought medical treatment for flu-like symptoms as of Oct. 26, according to the Beijing Influenza Sentinel Surveillance Network, which also said that many of the rapidly progressing cases have been children, particularly primary or middle school students over six years old.

The Beijing Children's Hospital reported on Oct. 26. that they were treating over 7,000 patients—Chinese media advised parents to simply stay home and administer flu medicine if an infected child has a fever. In an effort to prevent further overcrowding in hospitals, experts cautioned that hospitalization should only be an option if the fever becomes hard to bear.

“Right now the hospitals are full of children,” said one Beijing resident via Radio Free Asia. “They developed high fever very quickly, followed by vomiting, showing no signs of recovery even after a week.”

Flu season this year has struck much more severely, one to two months earlier than in previous years, according to medical personnel.

The number of reported H1N1 fatalities may be the "tip of the iceberg," according to Michael O'Leary, the World Health Organization’s (WHO) representative in China, as reported by the regime’s official English-language China Daily on Oct. 28.

WHO noted that death resulting from the H1N1 virus in China greatly exceed official numbers.

"Beijingers have hardly paid attention to swine flu, and even feel numb about it," Mr. Liu, a Beijing resident, told The Epoch Times. "People in China don't know how serious this is, so the government is concealing things. It was only when Beijing authorities publicly told big hospitals to take in patients 24 hours a day, and the media also started reporting on the spread of the flu among the masses that the situation was given attention.”

The Beijing Municipal Health Bureau has required that all hospitals stay open 24 hours a day, 7 days a week, and their resources are currently stretched to the limit. Yet even community hospitals that normally never admit cases based solely on high fever began taking several patients with these symptoms. Many Beijing hospitals have been distributing thousands of free masks daily.

The city will experience a combination of both seasonal flu and the H1N1 virus over the coming winter, says Fang Laiying, head of the Beijing Municipal Health Bureau. As winter approaches, H1N1 will account for about 50 percent of all flu cases, he said.

Taiwan’s Central News Agency noted that many bloggers from outside China are reminding mainlanders that the way the Chinese regime handles a flu outbreak is different from other countries. One Beijing blogger named Zhao wrote that, “due to the government's past history of deceiving the general public and promoting false news stories, people no longer believe what the government media says.”

The virus has been especially prevalent in children over six who received the H1N1 vaccine shots. With all major Beijing hospitals overcrowded with patients, some have noted that the degree of public panic is comparable to SARS.

“There is no longer statistical numbers collected for H1N1 cases, just conventional treatment and conventional inspections. The numbers are not reported,” an operator for Beijing’s public welfare health hotline told Radio Free Asia.