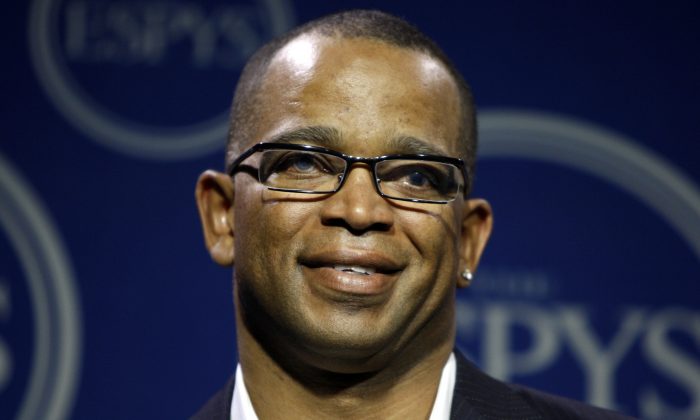 An article saying Fox News used a Stephen A. Smith picture in a tribute for Stuart Scott, who died over the weekend, is fake. Stuart Scott, the ESPN anchor, died at age 49 of cancer, according to reports on Sunday. In a Wednesday, July 16, 2008 file photo, Stuart Scott poses in the press room at the ESPYs Awards,in Los Angeles. Scott, the longtime “SportsCenter” anchor and ESPN personality known for his known for his enthusiasm and ubiquity, died Sunday, Jan. 4, 2015 after a long fight with cancer. He was 49. (AP Photo/Matt Sayles, File)
US

Stuart Scott, the ESPN anchor, died at age 49 of cancer, according to reports on Sunday. He leaves behind girlfriend Kristin Spodobalski and daughters Taelor and Sydni.

ESPN reported on his death. Scott was diagnosed with cancer in 2007.

He leaves behind two daughters and a girlfriend. According to reports on Sunday, Spodobalski was with him when he died, caring for him every step of the way.

That man is Stuart Scott, and his contributions to the sports lexicon are writ large. But they are only one aspect of his legacy. When he passed away, he left behind so much more. He inspired his colleagues with his sheer talent, his work ethic and his devotion to his daughters, Taelor, 19, and Sydni, 15. He defied convention and criticism to help bring this network into a new century. He spoke to the very athletes he was talking about with a flair and a style that ESPN president John Skipper says, “changed everything.”

His former partner, Rich Eisen, also gave a moving speech about him on Sunday:

“I loved this man. I still love this man, and the fact that he has passed away is absolutely mind-boggling, and a travesty. He battled cancer as bravely as anybody else, and I know there are many people out there who are battling cancer right now… Stuart would want you to know to keep fighting, and that he didn’t lose his battle with cancer. He fought it as bravely as he possibly could. And as you go to bed tonight, flip your pillow over to the cool side, and before you go to sleep — as Stuart would say, when you hit your knees tonight — and pray to the big man for his beautiful daughters who he loved, Taelor and Sydni.”

ESPN President John Skipper said in a statement that Scott was “a true friend and a uniquely inspirational figure” and that his “energetic and unwavering devotion to his family and to his work while fighting the battle of his life left us in awe, and he leaves a void that can never be replaced.”

Scott accepted the Jimmy V Perseverance Award at the ESPYs in July. During his speech, he told his teenage daughters: “Taelor and Sydni, I love you guys more than I will ever be able to express. You two are my heartbeat. I am standing on this stage here tonight because of you.”

On Sunday morning, NFL Network broadcaster Rich Eisen’s voice broke as he reported the death of his good friend, with whom he worked on “SportsCenter” broadcasts.

“I love this man,” Eisen said.

ESPN anchor Hannah Storm called him “our colleague, our friend and our inspiration” as she reported the news. On the network’s NFL pregame show, Chris Berman said, “Stuart made ESPN what it is, he made us better people.”

He later worked for several TV stations in the southern United States before he joined ESPN in 1993.

In the mid-1990s, he hosted “SportsCenter.” Later, he covered a number of sporting events, including the NBA Finals, the Super Bowl, the NCAA Tournament, and the World Series.