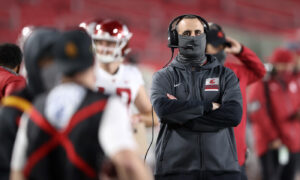 Stuart Scott, the longtime ESPN anchor and reporter, has been battling cancer for some time.

He announced early last year that it had returned.

Scott was featured in a video that was broadcast at the 2014 ESPY Awards.

He was then given the Jimmy V Perseverance Award.

Scott thanked Keifer Sutherland for giving him the award on stage, saying 24 is his favorite show.

“Every day I’m reminded that our life’s journey is about the people who touch us,” said Scott.

He said that when he heard that he was to receive the award, he was speechless. He has given it out before himself.

He said that he follows the maxim: “Don’t give up. Don’t every give up.”

Refuse to back down. @StuartScott is a fighter who won’t ever give up. http://t.co/TqgP9mVUnA | #DontEverGiveUp | #ESPYS

“To be honored with this, I now have the responsibility to never give up.”

He added that he’s been working to help the Jimmy V Foundation, which is involved in cancer research and prevention.

Scott announced on Twitter late on January 15, 2013 that he would undergo chemotherapy every two weeks but would continue to work.

The “SportsCenter” host was first diagnosed with cancer in 2007, when an emergency appendectomy revealed a malignant tumor. He underwent chemotherapy again in 2011.

The 47-year-old Scott joined ESPN in 1993. He quickly became popular for signature phrases such as “Boo-yah!”

He tweeted: “Cancer wants to re-appear..picked the right guy cuz I HIT HARD all day long!!”