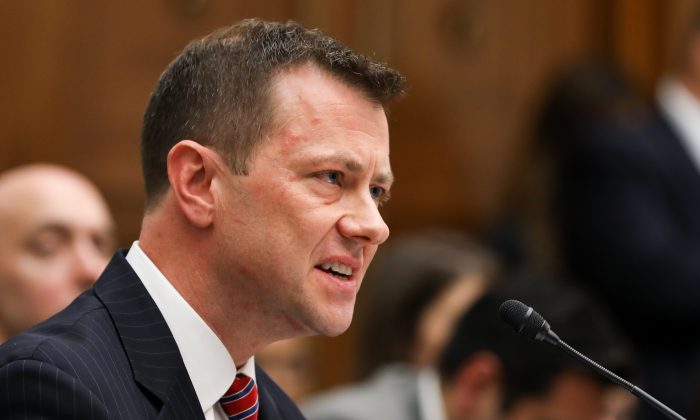 FBI Deputy Assistant Director Peter Strzok testifies at the Committee on the Judiciary and Committee on Oversight and Government Reform Joint Hearing on, “Oversight of FBI and DOJ Actions Surrounding the 2016 Election" in Washington on July 12, 2018. (Samira Bouaou/The Epoch Times)
By Petr Svab

On Jan. 4, 2017, the FBI’s Washington, D.C., field office drafted a document outlining a closure of its investigation into Lt. Gen. Michael Flynn, then-adviser to Donald Trump. In the afternoon that day, Peter Strzok, then-head of the bureau’s counterintelligence operations, urgently reached out to agents handling the Flynn case, telling them not to close it, documents filed in a federal court on April 30 show.

The newly released documents show that the FBI concluded there were no more leads to follow in the Flynn probe nearly three weeks before Strzok and another agent conducted the fateful interview.

The closing document details that the bureau opened an investigation on Flynn to determine whether he “coordinated activities” with Russia in a way threatening national security or in violation of Section 951 of the Foreign Agents Registration Act (FARA) or related statutes.

As reasons for the probe, the FBI cited public information about Flynn’s “ties to various state-affiliated entities of the Russian Federation” and his 2015 trip to Russia. It’s not clear what the nature of the ties was. After leaving his DIA post in 2014 on bad terms with the Obama administration, Flynn signed with a speaker’s bureau that arranged paid speaking engagements for him. Among those were several for Russia-linked companies, including the U.S. subsidiary of Kaspersky Lab and the state-funded RT television. It was the RT gig that brought him to Russia in 2015, where he sat at the main table at an RT inaugural gala. Russian President Vladimir Putin briefly sat at the same table that night.

He received a DIA defensive briefing before the Russia trip and was debriefed after.

Other reasons cited by the FBI were Flynn’s advising the Trump campaign on foreign policy and holding a top security clearance.

Yet, by January 2017, the investigators had turned up empty handed.

They requested information on Flynn from two sources, whose names are redacted in the document, but are both likely to be government agencies. Both reported no “derogatory information” about him.

The FBI also reached out to one of its “established” informants for information on Flynn. This informant provided a story, heavily redacted in the document, saying he witnessed Flynn take a cab ride after an event and that a second person “surprised everyone” and got into the cab with Flynn and joined him for a subsequent train ride.

The account aligns with a story spread around the same time to the media by Stephan Halper, a Cambridge professor and longtime FBI informant.

The story detailed a dinner organized by the Cambridge Intelligence Seminar (CIS), an ongoing series of meetings for intelligence community members, academics, and researchers co-convened at the time by Halper.

Flynn went to the CIS diner in February 2014, when he was still head of the DIA. Among the roughly 20 attendees was Svetlana Lokhova, a Cambridge historian of Russian descent who specialized in Soviet intelligence. The informant said he believed Lokhova’s father was a Russian oligarch. A 2015 Telegraph article said her father was a Russian “shipping magnate.” She denied her father was either an oligarch or a “magnate,” in a phone call with The Epoch Times. She took issue with having her family members dragged into media spotlight.

Lokhova disputed Halper’s version of the story, saying she only spoke briefly to Flynn at the event and didn’t join him for a cab ride, not to mention a subsequent train ride. They were never alone together, she said, adding that Halper didn’t even attend the event.

“Following the compilation of the above information, the CH team determined that CROSSFIRE RAZOR was no longer a viable candidate as part of the larger CROSSFIRE HURRICANE umbrella case,” the document said.

About 25 minutes later, Strzok texted an FBI agent whose name is redacted in the released documents.

“Hey if you haven’t closed RAZOR don’t do so yet,” Strzok wrote.

“Still open, right?” Strzok asked. “And youre [sic] case agent? Going to send you [redacted] for the file.”

“I have not closed it, I’ll double check to see if [redacted] had done it,” the agent said. “Still open and I’m still listed as the Case manager (had to double check).”

“Will do,” the agent replied.

Strzok followed with a text to Lisa Page, his paramour at the time and also then-special counsel to the FBI’s then-Deputy Director Andrew McCabe.

“Razor still open. @: but serendipitously good, I guess. You want those chips and oreos?” he wrote.

“Phew,” Page replied. “But yeah, that’s amazing that he is still open. Good, I guess.”

It’s not clear on what grounds Strzok wanted to keep the case open.

There are indications, though, that the FBI’s top brass, Strzok included, was contemplating a pivot to a shaky legal theory to keep the Flynn probe alive.

At 9:53 that morning, Strzok emailed Page a document titled “Conducting Foreign Relations Without Authority: The Logan Act” released in 2015 by the Congressional Research Service (pdf).

The Logan Act, passed in 1799, prohibits Americans from conducting diplomacy on their own with countries that the United States has a dispute with.

In January 2017, unnamed government sources leaked to media that Flynn made phone calls to then-Russian Ambassador to the United States Sergey Kislyak and may have violated the act because the two discussed the recent sanctions imposed on Russia by outgoing President Barack Obama.

The leaks put pressure on the Trump team, which had initially denied that Flynn discussed the sanctions during the calls.

But it was a paper tiger, according to Sidney Powell, Flynn’s attorney and former Texas prosecutor.

Nobody has ever been successfully prosecuted for violating the Logan Act. Moreover, it was Flynn’s job, as part of Trump’s transition team, to establish relations with foreign officials and give them a sense of where the incoming administration stood on things.

The new documents come just a day after the judge presiding over the case, Emmet Sullivan, unsealed a page of handwritten notes that shows one of the FBI’s top officials question the tactic the bureau wanted to use during the Flynn interview.

“What’s our goal? Truth/Admission or to—get him to lie, so we can prosecute him or get him fired?” the official wrote, dating the notes Jan. 24, 2017, and signing with initials “EP,” reportedly standing for Edward William Priestap, then-FBI head of counterintelligence.

The notes were handed over to Flynn as a result of an ongoing review of his case by Jeffrey Jensen, U.S. attorney for the Eastern District of Missouri, who was directed in January to perform the review by Attorney General William Barr.

Flynn had asked Judge Sullivan in January to allow him to withdraw his original guilty plea, saying he only entered it because his former lawyers hadn’t represented him effectively at the time.

Judge Sullivan denied in December 2019 Powell’s request for a list of additional documents and for dismissal of the case.

The judge is “going to have to” dismiss the case, Powell told Fox News’ Sean Hannity on April 29. Trump wrote on Twitter on March 15 that he was “strongly considering” a pardon for Flynn given the evidence.

Update: The article has been updated to reflect that Svetlana Lokhova denied her father was an oligarch or a magnate and that she took issue with having her family members dragged into media spotlight.