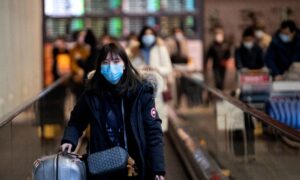 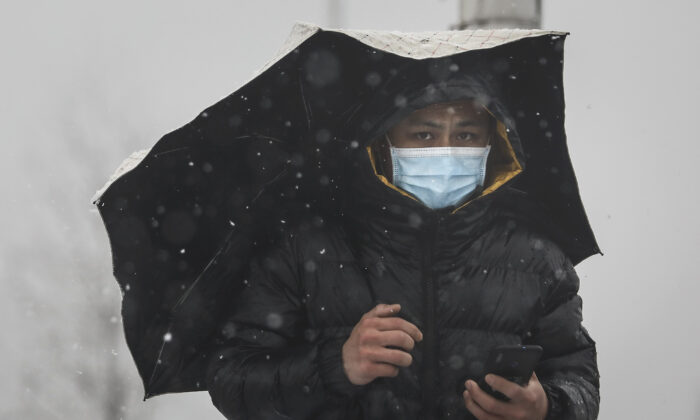 A man wears a protective mask as he holds an umbrella on the Yangzi river bridge as snow falls in Wuhan, Hubei, China, on Feb. 15, 2020. (Getty Images)
INSIDE CHINA

Absent State Help, Wuhan Locals Rely on Each Other to Survive the Coronavirus

Feng Mingqin, a Walmart worker in the coronavirus outbreak epicenter of Wuhan, in central China, had trouble breathing whenever she moved around.

CT scans showed an infection in both of her lungs, and the doctor who diagnosed her with COVID-19 on Feb. 5 told her to seek “immediate hospitalization.”

Feng tried her best. For nine days straight, she slept on chairs in the hallway of a hospital, lining up daily for injections and medication while her case made the rounds through the labyrinth of administrative agencies that would determine whether she could be hospitalized.

In the now locked-down city, virus control officials have ordered all people seeking hospitalization to be reported first through the residential neighborhood office and then the subdistrict office before authorities can provide authorization.

Feng is still waiting for a decision.

The Epoch Times has spoken with a number of patients and families who complained that the virus control officers were apathetic and only told them to wait. Many who became ill had to repeatedly fill out an application form for hospitalization and call hotlines, while some patients died at home while awaiting a response.

Frustrated with the lack of care, groups of volunteers have stepped in to help those who have failed to secure treatment.

Wuhan authorities on Feb. 10 announced that all severe coronavirus patients were hospitalized. They said they identified 1,499 such patients after a house-by-house search covering more than 98 percent of the local population.

Yet many say the investigation was sloppy and didn’t help them at all.

“I don’t know if they did the search or not, but they never came to our home,” Luo, who became infected while taking care of his sick father, told The Epoch Times on Feb. 11.

Since virtually all transportation was halted in the city, people from all walks of life began to volunteer their own vehicles to help ferry doctors and nurses to and from the overflowing hospitals.

Chat groups have sprung up on social media, where medical professionals can provide services that range from clinical advice to emotional support. Locals also share tips based on their personal experiences, such as how to secure treatment.

Others have set up a hotline in which they help collect and organize information about patients and submit it to the nearest hospital free of charge to speed up their treatment.

One of the hotline volunteers, when reached by phone, told The Epoch Times that they are able to arrange treatment for up to 60 percent of callers each day. There are about eight people on her team working the hotline.

From each of the dozen or so districts across Wuhan, an average of 10 to 20 people call in every day, she said.

“There were a lot of people seeking help,” she said.

Many patients also took to social media in the hopes of having their voices heard.

The Epoch Times confirmed that a number of patients have been admitted to the hospital through the volunteers’ hotline.

For the volunteers, the work is taking a mental toll.

Liu Fang, who takes more than 100 hotline calls over the course of a week, told Chinese media she almost tears up each day when she’s on the phone.

“Wuhan people are going through so much,” Liu said, adding that many people who worked by her side had experienced mental breakdowns because of the stress.

Zhang Jiang, who volunteered to help with community work, said he had never seen Wuhan in such a serious crisis before nor heard of the restrictive lockdown measures currently in place.

The neighborhood where he volunteers is home to 10,000 people, but only has about 10 district officers who are in charge of checking people’s temperatures, arranging hospital pickups, and delivering medicine or vegetables to the needy.

Zhang, who says said he’s heard of volunteer drivers who died after being infected, has decided to keep going.

“There’s actually no other way, someone has to take on these jobs,” he said, according to Tencent News.