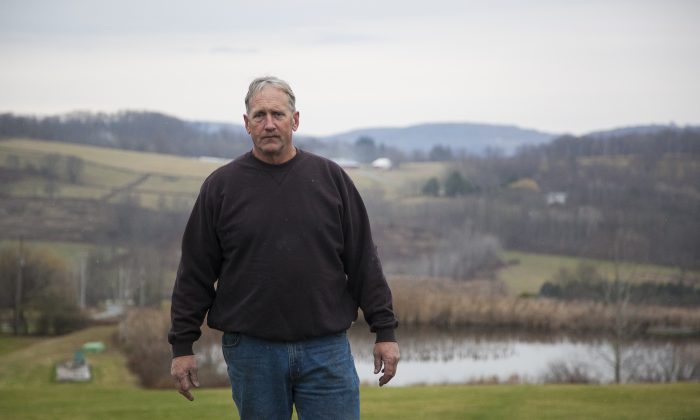 Bill Graby, a dairy farmer, on his land in Sullivan County, N.Y., on Nov. 13, 2014. Graby was forced to file bankruptcy and may lose his over 100-year-old family farm if Gov. Andrew Cuomo continues to stall in making a decision on the fracking moratorium in New York. (Samira Bouaou/Epoch Times)
Environment

NEW YORK—In 2010, former New York state governor David Paterson issued an executive order placing a six-month moratorium on fracking across the state. The temporary ban has stood the test of time through numerous bills and two administrations, but political pressure to lift it is building.

Since the moratorium is not codified into law, it does not have an expiration date and thus Gov. Andrew Cuomo has yet to decide what to do—much to the chagrin of many struggling farmers in upstate New York who stand to benefit from fracking on their land.

Some say the ban was instituted in response to the growing protests from environmentalists and New York City residents who were concerned that an aquifer in upstate New York that provides water to the city would be contaminated.

While environmentalists followed Cuomo around during midterm election campaigning, pressuring him to take a stance and ban fracking once and for all, some farmers and large landowners in upstate New York have been saying “frack on!”

Even though farmers are among the largest landowners in the state, they are not necessarily the wealthiest. Actually, many farmers have been struggling to keep their farms, ever since the economic downturn of 2008, and things have not gotten much better for some farmers.

Bill Graby, a 61-year-old dairy farmer in Sullivan County, N.Y., has 191 acres left of his multi-generational family farmland—he used to own more. He knows farming and that’s all he wants to do.

“This is what I’ve done all my life. I know this. I really haven’t made that many mistakes. Everything you see out there except the real high part of the barn, I put up, since 1975,” Graby proudly stated.

Since the economic downturn, Graby’s expenses have exceeded his income and even after filing bankruptcy, he is facing foreclosure and the potential loss of his over 150-year-old farm. Graby has lost thousands of dollars every year for several years. He says the costs are nonstop.

MORE: As NY Turns to Fracking, Farmers Cash In

Farming expenses include feed, grain, medicine, equipment, repairs, fuel, electricity, trucking, and more. “A thousand gallons of fuel is $4,000 and lasts about 2 to 3 weeks when cropping,” Graby said.

According to a 2012 U.S. agricultural census, the average annual costs for farms specializing in dairy cattle and milk production per farm were $713,164, a 64 percent increase over 2007.

In Sullivan County, the average expenses per farm were $84,878 in 2012, and the average net income (after expenses are paid) per farm was $8,322, according to the census.

Typically, farmers who make a good income buy a piece of equipment and reinvest it back into their farm to stay current, but Graby says for so many years people have not been able to do that.

“Now you have 25 farmers left in Sullivan County when there used to be a couple hundred. Most of us are running 30-year-old tractors and 15-year-old equipment.”

According to the census, the number of dairy farms nationwide declined by 20 percent from 2007 to 2012.

And even though the cost of milk is now at a record high at $25 per 100 pounds, Graby says he’s losing about $1.60 per 100 pounds because he has to pay a $1.35 trucking fee plus an additional fee for marketing administration and other miscellaneous fees.

“The cost is set by the federal government; it used to be free,” Graby complained.

Whittaker, who owns 1,000 acres, estimates that her taxes are well over $20,000 per year. Similar to Graby, Whittaker felt the crunch of the economic downturn in 2008 and says it was the worst year for dairy farmers because everyone was losing money—”using up equity in the business to stay in business.”

She remembers the historic floods of 2006 and 2011 that took the crops, forcing farmers to buy more feed.

The Mid-Atlantic flood of 2006 affected many lakes, rivers, and communities from upstate New York to North Carolina, according to the National Weather Association website. It was considered to be one of the worst floods in the United States since Hurricane Katrina in 2005.

The U.S. Geological Survey website states that rainfall throughout New York in 2011 was the greatest since 1895 causing record flooding.

With the low milk price, the high costs, and the natural disasters Whittaker’s family had to really tighten their belts. “We went for quite a long time without personal pay,” she said.

Sullivan and Broome counties are prime areas for oil and gas drilling, as they both sit atop the oil and gas rich Marcellus and Utica shales.

Whittaker says since the 1930s landowners have been entering leases with oil and gas companies on and off for different reasons.

Despite the known risk of water contamination, she and Graby can’t understand why there is such a push, especially in New York City, to prevent them from leasing their land for fracking.

Graby was among the many landowners who formed coalitions in 2009 and 2010 in order to gain leverage in negotiations with gas and oil drilling companies. He is the vice president of Sullivan-Delaware Property Owners Association, which has about 70,000 acres to bargain with.

Chesapeake Energy Corp. had made the best offer at $2,500 per acre, but before the landowners could sign on, the moratorium was put in place.

Right now, Graby already has a gas pipeline on his land that’s been there for over 60 years. “I have the millennium pipeline that runs right between my house and my barn that has natural gas running through it. That was put in back in 1949,” he said.

He’s not worried about pollution or contamination, “absolutely not,” because he has endeavored to educate himself on the potential risks associated with fracking. He says companies have already been performing fracking more safely .

“We want to go to the closed loop system because there is less chance of anything happening, like pollution,” Graby explained, referring to the process by which the flow back from drilling goes directly into tanks through a tube rather than into open manmade ponds.

Dan Fitzsimmons, president of the Binghamton/Conklin Coalition and the JLC, which encompasses 39 coalitions representing over 1 million acres, says coalitions were formed to “protect the landowners and to make sure the companies were doing the right things, best management practices.”

He has seen the closed loop drilling technology and says he goes out all the time looking at best management practices to recommend to coalitions.

The JLC meets monthly and “brings in speakers to educate everyone on how things should be done,” says Fitzsimmons. He declared that there is no disposal of anything on the property.

Besides, New York is going to have the strictest regulations, says Graby, referring to the long-awaited environmental impact study that was conducted during the temporary moratorium and continues to be revised.

He believes the decision to place a moratorium on fracking has something to do with the aquifer that provides water to New York City, but notes that fracking near that reservoir is already off limits.

Whittaker says the moratorium happened for the good of all of New York state, to look at how drilling companies were doing things—for the safety of everybody.

All three landowners see gas drilling as an opportunity to stimulate the economy, and they are inspired by what they’ve seen and heard about from their landowner friends in Pennsylvania where fracking is allowed.

The benefits, according to these landowners, are significant. The number one benefit they all agree on is jobs. Graby says many families in Sullivan County are leaving because there just aren’t any jobs.

“There’s nothing going on here, there’s no jobs here,” Graby said. Fitzsimmons agrees, saying “Most counties in upstate New York, people are leaving because there are no jobs, no companies,” he said.

Whittaker looks at Pennsylvania where small towns have been “reinvigorated.” She credits jobs with bringing in more people, better road systems, and more tax dollars for schools. Fitzsimmons says the schools benefit the most.

Bradford County, Pa., is a prime example of the economic benefits associated with fracking, says Graby and Fitzsimmons.

According to Fitzsimmons, “Bradford County is the happiest drilled county in Pennsylvania,” having been the poorest county in the state before, he says.

The Marcellus Shale Education and Training Center reported in 2012 that total personal income tax collections in the county increased 6.6 percent between 2007 and 2009 compared to a statewide average county level decrease of 5.5 percent during the same time period.

It noted that “most of the increase in Personal Income Tax collections was due to leasing income rather than employment.” Wage income increased 2.8 percent while royalty income increased 611 percent, according to the report.

The report notes other economic benefits to the county such as “rail, roads, and hotels, and local nonprofits informally are reporting major local charitable giving by gas companies.”

In the city where there is not much open land, there are benefits as well.

Graby believes that in New York City “by 2016 all your major buildings, buses, trucks, and mail trucks are going to be switched over to natural gas,” because it releases less carbon into the air. And its cheaper, says Fitzsimmons.

Graby and Fitzsimmons encourage skeptics to stop listening to what other people say and instead, talk to experts or go to a gas well site and see for yourself. They are just as concerned as anybody else about the risks of fracking on their land. These landowners have owned their property for generations and don’t want to see it ruined or their communities hurt.

“We want to make sure that it is done properly, this is our property,” said Fitzsimmons.