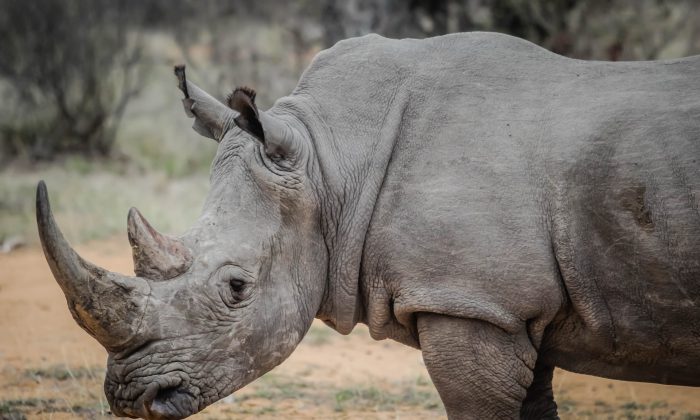 It is estimated that no more than 28,000 rhino are left, their numbers decimated by poachers looking to sell the valuable rhino horn used in Chinese medicine. (pexels/pixabay.com)
Viewpoints

“Stroop,” a film about rhino poaching in South Africa, has won 10 international awards at 15 film festivals in Europe and North America, where it was screened to packed audiences. It’s being hailed as a lyrical yet hard-hitting documentary—made with female passion—in a wildlife film industry dominated by men.

Bonné de Bod and Susan Scott are the filmmakers. While Scott trained as a cinematographer in the United States, De Bod has been a wildlife television presenter with the South African Broadcasting Corporation (SABC), the country’s public broadcaster, for the past decade.

The two women sold everything they had, moved in with their parents, and crowdfunded to make what has been called the most important movie about the genocide of the rhino. “Stroop” (meaning “stripped” in Afrikaans, a reference to rhinos being separated from their horns) took four years of filming to complete.

A century ago, half a million rhinos (Ceratotherium simum) could be found across Asia and Africa. Today, it is estimated that no more than 28,000 are left on the planet.

Some call rhino poaching a crisis, some call it a war, and others even call it a campaign. De Bod calls it a genocide. The word is defined as the “intent to destroy, in whole or in part,” and this applies to the mass slaughter of rhinos; it means to wipe out a species.

Every day, three rhinos are killed in South Africa; that’s one every eight hours.

Rhino horn is the most valuable substance on the planet. A horn can fetch $300,000 on the black market; it’s more valuable than diamonds, gold, or platinum.

Eighty percent of the world’s rhinos are found in the Kruger National Park, South Africa. This area, about the size of New Jersey, is targeted by some 15 gangs of poachers every day. A park ranger there is 12 times more likely to die than an FBI agent.

“At the end of the day, someone must stand between the rhino and the poacher,” says a game ranger. The park has 450 rangers, who often find themselves in war-zone combat situations. They are poorly paid and face extreme danger every day.

The Kruger National Park has a sophisticated high-tech surveillance system called “Postcode Meerkat,” and there are also K-9 dog patrols. But as long as the insatiable demand for rhino horn continues, so will the war.

The gruesome methods used by the poachers are well documented. In order to avoid being tracked, the poachers—there are always three of them—will attack a rhino with an ax, rather than a gun. The ax is used to chop through the rhino’s face. Then, the Achilles tendons must be severed.

Should the rhino have a calf, the calf has been known to stay with its dying mother for days.

Criminal groups are using the same routes and techniques for wildlife trafficking as for smuggling other illicit commodities, exploiting gaps in national law enforcement and criminal justice systems. These are serious crimes, driven by demand, facilitated by corruption, and linked to organized crime and militias in many countries, as well as terrorist networks.

The rhino poaching issue is a multilayered problem. It starts with an ancient belief held by millions of people, hundreds of miles across the ocean, which regards the rhino horn as being able to cure disease and uplift status. The brutal slaughter is driven by insatiable markets in China and Vietnam. There is a perception that ground rhino horn is a miracle medicine, and it is sold on the black market for $94 a gram.

“There is an epidemic of cancer in Hanoi,” de Bod explains. The pollution in Hanoi is extreme. Two hundred Vietnamese die every day from cancer. The super-rich believe that rhino horn will cure lung and liver cancer. It is used as a detox for hangovers too.

“Traditional Chinese medicine believes that rhino horn boosts the immune system. The mythical, powerful properties they give it was something to see and film,” de Bod says. “In fact, the horn has no more medicinal property than keratin, but how do you change an ancient mindset?”

The parts of the horn that aren’t used as “medicine” are carved into tsatskes—status symbols for the super-rich.

On the ground in South Africa, it begins with poverty, as many poachers come from poor communities surrounding the national parks. After 25 years in a post-apartheid world, there are 2 million Shangaans living in abject poverty, utterly disconnected from nature.

“How can you love something if you don’t know it?” de Bod says. “We have to get communities involved. Young children must be taught that keeping a rhino alive is worth more to them. That is why we have an outreach program. The movie, translated into Shangaan, has been screened to local communities.”

The South African rhino poaching crisis is compounded by corruption at the highest levels. Under government “care,” poaching increased to 1,215 animals from 135 in national parks between 2012 and 2014—an increase of 800 percent.

Skukuza Court alone handles 40 to 60 cases a day. The criminal justice system seems to conspire to work in favor of the poachers, since paid defense teams can delay proceedings for five years. The group Outraged Citizens Against Rhino Poaching (OSCAP) was established in order to protest and document the number of poachers who walk free, only to be caught a few weeks later for poaching.

Part of “Stroop” was filmed in communist Vietnam. Since it’s highly dangerous there for journalists, in order for de Bod and Scott to capture the black market—the destination for rhino horn—they posed as backpackers. Their cameras and true motives were hidden.

Rhino farmers live under constant threat that their animals may be attacked. Insiders will inform the poachers where the rhinos are.

Protection for rhinos is big business. Vana Mockford has a private game farm, where each rhino has its own security guard.

Pieter Els, another private rhino owner, made the front page of the British newspaper the Daily Mail, when nine of his rhinos were killed in one night.

“Making this film has been an emotional rollercoaster ride,” de Bod says. “I was shocked to see the unbelievable cruelty inflicted on rhinos, but then I remembered why we had to make this film. These are God’s creatures. We, as humans, have a moral responsibility to protect them, to protect all living species.”

“Gorillas in the Mist,” a 1988 movie based on the book by U.S. primatologist Dian Fossey, successfully drew attention to the plight of mountain gorillas in Rwanda.

“Blood Lions,” a 2015 documentary about a business dubbed “canned hunting” by critics, led a South African parliamentary committee to call for a review of captive lion breeding.

“Stroop” may well be the game-changer that halts the extinction of rhinos. De Bod and Scott’s raison d’être has always been, “We made this film so that no one can say they didn’t know.”