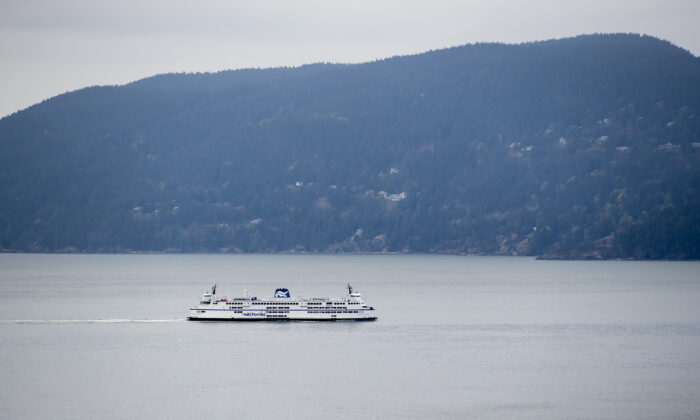 A ferry traverses Howe Sound from Horseshoe Bay to Langdale, B.C., in a file photo. Environment Canada has warned that strong winds are expected in Howe Sound, Metro Vancouver, and inland Vancouver Island on Nov. 8 and 9, 2021. (The Canadian Press/Darryl Dyck)
Canada

In the Metro Vancouver region, “a rapidly deepening weather system” will generate strong southeast winds starting the night of Nov. 8, with southeast winds “peaking up to 50 km/h, gusting to 70” during the overnight hours, Environment Canada said in a statement.

Winds of 40 km/h gusting to 60 will turn southwest in the morning of Nov. 9 and will continue throughout the day, and will also impact Howe Sound and inland Vancouver Island.

A separate notice from Environment Canada also warns of strong winds from “an intense Pacific front” that will arrive along the B.C. coast on the afternoon of Nov. 8, affecting communities along the Strait of Georgia and Haro Strait, including Greater Victoria, Southern Gulf Islands, East Vancouver Island, and the Sunshine Coast.

The storm will spread strong southeast winds of 70 km/h gusting to 90 in the evening. The winds will turn southwest and ease the next morning.

“Damage to buildings, such as to roof shingles and windows, may occur. High winds may toss loose objects or cause tree branches to break. Avoid wooded areas to prevent injury from falling trees or branches. Campers should move to sturdy shelters,” Environment Canada said.

Extreme weather occurred over the weekend in Vancouver, with a waterspout sighted near the Vancouver International Airport on the evening of Nov. 6, which later pushed its way toward West Vancouver and Howe Sound, prompting Environment Canada to issue a rare tornado watch for the areas that evening.

“Due to fallen trees from yesterday’s windstorm, University Boulevard from Blanca Street to Wesbrook Mall is closed to all traffic,” TransLink said in the Nov. 7 statement, adding they are waiting for the Vancouver municipality to clear a “large number of fallen trees.”

TransLink said it was told that the cleanup could take several days to complete.