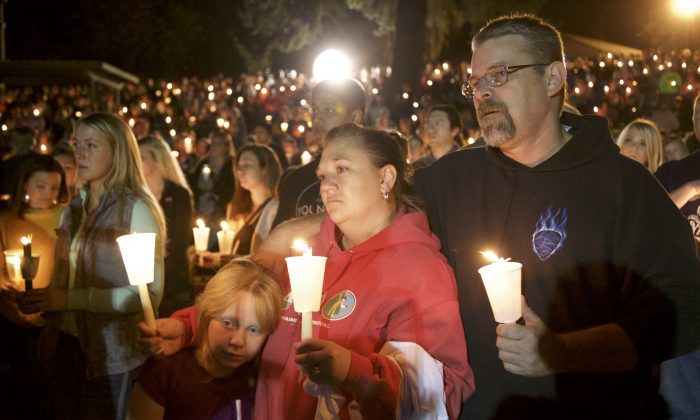 Denizens of Roseburg gather at a candlelight vigil for the victims of a shooting October 1, 2015 in Roseburg, Oregon. (Michael Lloyd/Getty Images)
Crime and Incidents

Strong Support for Guns in Town Shocked by College Shooting

ROSEBURG, Ore.—Hunting deer, elk and bear in the surrounding hills and fishing for salmon and steelhead have strong followings in southern Oregon’s timber country, made famous by Western writer Zane Gray, who counted the North Umpqua River his favorite place to fish.

So does support for the right to own and carry a gun.

“I carry to protect myself — the exact same reason this happened,” said Casey Runyan, referring to the deadly shootings Thursday at Umpqua Community College. Runyan carries a Glock 29 automatic pistol everywhere he goes.

“All my friends agree with me. That’s the only kind of friends I have,” said Runyan, a disabled Marine Corps veteran who says he carried a machine gun in the infantry in Iraq.

Hanlin also sent a letter to Vice President Joe Biden in 2013, after the shooting at a Newtown, Connecticut, elementary school. Hanlin said he and his deputies would refuse to enforce new gun-control restrictions “offending the constitutional rights of my citizens.”

Retired U.S. Army nurse Donice “Maggie Rose” Smith, who also hosts a talk show on Internet radio, said she and her husband, a retired Army captain, chose Douglas County for their retirement because of a low crime rate, and strong local support for First and Second Amendment Rights.

J.C. Smith said barring people from carrying guns on campus made it particularly vulnerable to a “lone wolf” attack.

“With current world events, (armed people) would keep the ground safer,” he said.

Twenty five years after Oregon’s timber industry went into a tailspin as protection for the northern spotted owl reduced national forest logging and automation took over jobs, the region still counts timber as a major part of its economy, but now wineries draw in tourists.

Cavin said the college has a policy of no guns on campus, but did not feel the need for an armed security presence.

“This is an anomaly and a tragedy,” she said of the shooting.

At a candlelight vigil for the victims of the shooting, former student Sam Sherman said Roseburg was a “poor town, a mill town.”

“People don’t generally aspire to greater things here. So having a place you can go to do that is a big deal. For something that terrible to happen at such a small school is frustrating,” he said.