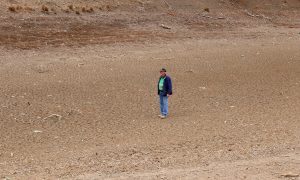 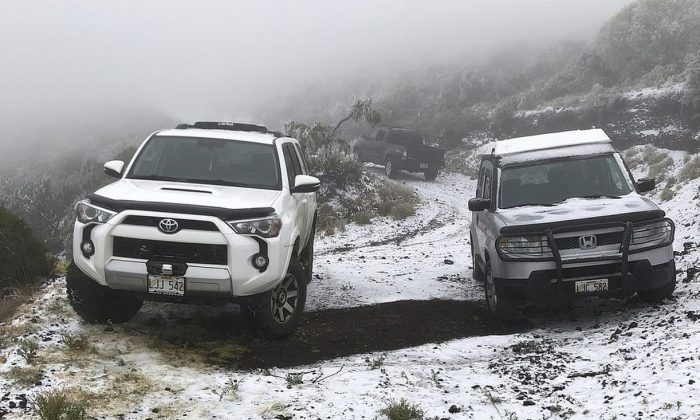 Officials said the coating at 6,200 feet in Maui might be the lowest-elevation snowfall in Hawaii. (The Associated Press)
US News

A strong storm brought power outages, harsh winds, and even snow to parts of Hawaii.

Strong winds, with some reaching 190 mph, took down trees and branches, leaving them across roadways or worse—across power lines and structures.

Hiro Toiya, director of the Honolulu Department of Emergency Management, called on people to have “extra caution” while driving.

Snow in our State Park? ⛄️❄️ Now that’s a first! . Polipoli Spring State Recreation Area on Maui was blanketed in snow this weekend during a powerful winter storm. At 6,200 feet, this may be the lowest elevation at which snow has been recorded in Hawai’i. . Video: Polipoli Spring State Recreation Area; mahalo Kimberly Espania. . #doyouwannabuildasnowman #winterstorm #polipoli #polipolistatepark #maui #snow #hawaiistateparks #optoutside #hawaiidlnr

“Conditions are windy and we do have trees and utility poles and other objects falling onto the street,” he told CNN.

Regarding the snowfall, it’s not unheard of in Hawaii, as snow often blankets the state’s highest mountains.

But a blanket of snow hit the Polipoli Spring State Recreation Area on the island of Maui, which might be the first for any Hawaii state park, said forecasters.

“[P]erhaps [for] the first time ever, snow has fallen in a Hawaii State Park,” Hawaii’s Department of Land and Natural Resources (DLNR) wrote on Facebook on Feb. 10.

It added: “Polipoli State Park on Maui is blanketed with snow. It could also be the lowest elevation snow ever recorded in the state.”

Meanwhile, there were reports of 60-foot-tall waves, CBS reported, and wind speeds of 191 mph were recorded at Mauna Kea Summit in Hawaii County.

The agency added that “several trees had fallen” at Kokee-Waimea Canyon State Park on Kauai, but no one was hurt.

“(Forecasters) are calling this an unprecedented event and we concur that we rarely if ever have seen the combination of record high on-shore waves, coupled with gale force winds,” said Sam Lemmo, administrator of the DLNR.

“That’s the strongest wind gust I’ve ever seen up there,” said Jon Jelsema, senior forecaster at the Weather Service office in Honolulu of the 191 mph gust, The Straits Times reported.

“Winter’s not over yet,” said National Weather Service meteorologist Matt Foster to the Star-Advertiser.

“But the immediate threat from this strong, low pressure system is about over. We may still get some surf on the north shores of Big Island and Maui … but for the most part, winds, snowfall and surf are down from their peak yesterday.”

Also, at Kapiolani Park in Honolulu, strong winds took down kiawe trees that are believed to be nearly a century old, reported local station KNHL.