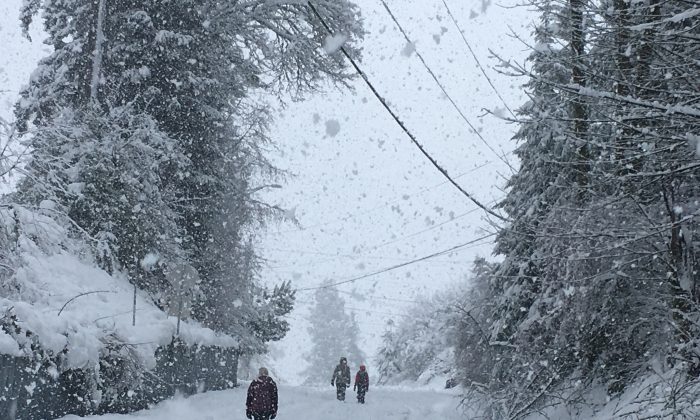 People walk up a closed off road as snow continued to fall in Olympia, Wash., on Monday, Feb. 11, 2019. (AP Photo/Rachel La Corte)
US News

Snow is not unheard of in mountainous parts of the tropical island chain, but officials say the coating at 6,200 feet at a state park on Maui could mark the lowest-elevation snowfall ever recorded in the state.

The National Weather Service says gusts hit nearly 70 mph in some areas, and the agency is warning of coastal flooding. A high-surf advisory was in effect for north- and west-facing shores of several islands.

The Honolulu Star-Advertiser reports that trees were toppled on several islands along with power outages and roof damage. Two ground hornbill birds escaped from the Honolulu Zoo after the storm damaged their enclosure.

Hawaii News Now reported that one man was injured when a utility pole crashed on his vehicle. Other minor injuries were reported.

Winter Storm Warning For Most of Wisconsin

MILWAUKEE—Another winter storm is making its way to Wisconsin.

The National Weather Service has issued a winter storm warning for much of the state beginning Feb. 11 night through Feb. 12 night. Forecasters expect 6 to 9 inches of snow with gusty winds up to 30 mph with the heaviest amount of snow from south central to central Wisconsin.

Snow on Sunday afternoon caused a 40-vehicle pileup on Interstate 94 in Eau Claire County, shutting down the road in both directions for about five hours. The Wisconsin State Patrol says seven people were hurt when seven semis and 33 cars piled up near Osseo.

They include a multi-vehicle crash on Interstate 15 in Lehi.

The Utah Department of Transportation has since issued an advisory that all semi-trucks heading east on Interstate 80 should be equipped with chains.

The weather has not forced any school closures. But the town of Alta is under interlodge, meaning nobody can go or stay outside.

All the snow is expected to wind down later this morning.

CHICAGO—A winter storm that’s bringing a mix of snow and freezing rain to Illinois could coat northern parts of the state with icy accumulations.

The National Weather Service issued a winter storm warning for Jo Daviess, Stephenson, Carroll and Whiteside counties in far northwestern Illinois for Feb. 11 afternoon through Feb. 12 night. Those counties are expected to see moderate snowfall and some ice accumulation.

Forecasters said the best chances of notable ice accumulations appear to be north of Interstate 80 and west of the Fox Valley.

Lighter ice amounts are expected in the Chicago area and south due to warming temperatures Monday night.

A winter weather advisory also covers a swath of central Illinois, including Springfield and Champaign.

SEATTLE—Schools closed across Washington state and the Legislature canceled all hearings Feb. 11 as snow and ice storms pummeled the Northwest again, with more winter storms predicted for areas that typically experience very rainy winters but usually get very little snow.

Seattle’s metro area has already been hit by three snowstorms this month and the National Weather Service reports that Seattle-Tacoma International Airport has received 14.1 inches of snow so far in February.

In the state capital of Olympia, state lawmakers canceled meetings and the University of Washington in Seattle and Washington State University in Pullman called off classes.

The latest storm to hit Seattle dumped 2 and 4 inches of snow and forecasters said more snow or rain was expected Monday and Tuesday for Washington state.

“Where changeover from snow to rain occurs, roads will likely become a slushy mess,” the National Weather Service said.

A tractor-trailer hauling live chickens crashed on slick Interstate 5 near Olympia. Some chickens escaped but officials said the driver was not injured.

In Northern California, Humboldt County beaches that have not had snow in more than 15 years received a dusting and blizzard conditions caused whiteout conditions on mountain roads.

Elsewhere around the U.S., the Midwest braced for more ice storms, heavy snow was expected for Michigan’s Upper Peninsula and roads in northern Utah were icy.