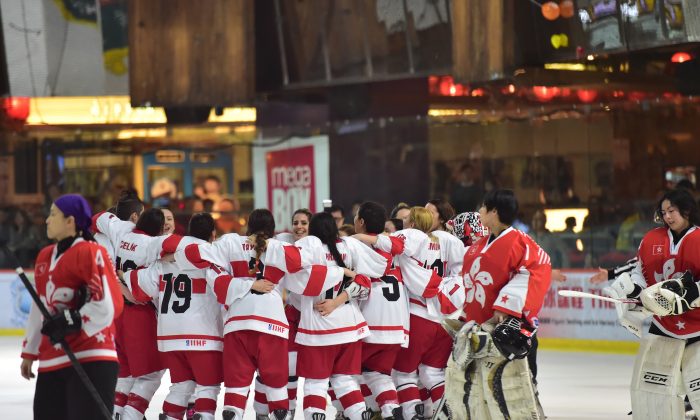 Turkey proved too strong for Bulgaria and South Africa racking up results of 11-3, and 8-4 respectively. Turkey’s match against Hong Kong was closer with Turkey coming away 4-1 winners. Turkey therefore take the qualifier place with a 9-point perfect score and will play in the IIHF Ice Hockey Women’s Division II group B World Championship in 2016.

Hong Kong put on a great display in each of their 3-matches in front of their many supporters finishing as runners-up in the competition on 6-points having beaten South Africa 4-3 on the first day of the event and winning against Bulgaria 5-1 on day-3, Saturday Feb 21.

South Africa took 3rd place with their 6-0 win over Bulgaria on day-2.

The final positions reflect the level of play shown by the four sides during the tournament. Turkey showed added power and were generally in attacking mode for much of their matches. South Africa countered well against Turkey to pull 4-shots back in period three when Turkey went through a short period of some disarray, but in general Turkey were in control when playing Bulgaria and South Africa.

Hong Kong was the only side to show real flair to match Turkey and lost in a close match with many attacks on goal at either end, but as the game went on Turkey showed added strength to win 4-1. Hong Kong contested all of their matches with a strong determination, showed good skating abilities and were enterprising in attack. With this performance Hong Kong moved up in the standings to second place compared with finishing bottom of the qualifications against Mexico, South Africa and Bulgaria in Mexico in 2014. This year’s performance underlined Hong Kong’s considerable improvement during the last year.

The Teams will be split into two pools for the initial round-robin phase comprising USA, Canada, Russia and Finland in Pool-A and Sweden, Germany, Switzerland and Japan in Pool-B.