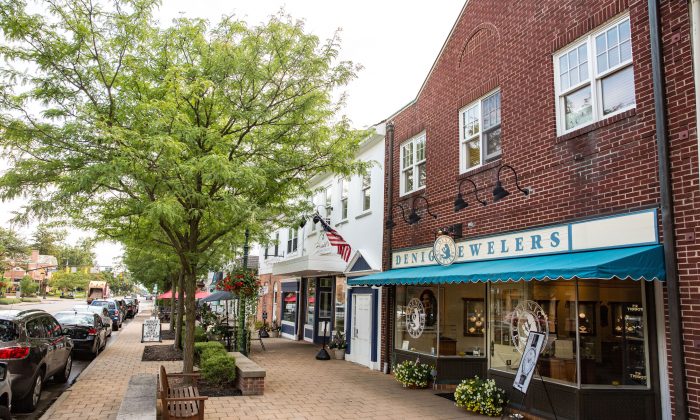 Shops and restaurants on High Street, in Worthington, Ohio, a suburb of Columbus on Aug. 4, 2017. (Benjamin Chasteen/The Epoch Times)
US News

Two-thirds of entrepreneurs who applied for loans received the full amount, according to survey
By Emel Akan

WASHINGTON—Optimism in the strength of the economy continues to push small-business confidence higher. Companies are reporting increased confidence in capital access and cash flow, a recent survey found.

The MetLife and U.S. Chamber of Commerce small business index surged to 69.7 in the third quarter, marking the sixth consecutive quarterly rise and matching the highest levels in the history of the survey.

The score shows that the majority of small businesses have a positive outlook for their companies and the environment in which they operate.

According to the same survey, one-fifth of small businesses applied for financing in the form of a loan or line of credit in the past year. And the majority of applications were successful, with two-thirds of businesses receiving the full amount. Of those who applied for credit, only 11 percent received a partial amount and 15 percent were rejected, found the survey.

Less than one-quarter of small businesses say it is hard to obtain financing, but opinions vary based on the company’s health, experience with the financing process, and years of operation.

And those that have sought financing in the past were more likely to say it is easy to obtain financing rather than difficult. In addition, the longer a small business has been in operation, the more likely it is to receive the full amount of a loan, found the survey.

The professional services sector is the most confident in the health of its business, while the retail sector continues to be the least confident despite a strong increase in the last quarter.

National economic outlook rebounded after having dropped in the second quarter. Fifty-five percent of small businesses were optimistic about the health of the U.S. economy in the third quarter, tying the highest rating in the history of the survey.

Perception of local economic conditions also rose. In the third quarter, the number of small businesses reporting their local economy as good increased to 51 percent, the highest mark in the history of the index.

The strong economic environment and recent legislative reforms are creating an incentive for entrepreneurs to grow their businesses. Hence, the overall optimistic outlook has motivated small business owners to secure financing.

“Small business owners continue to tell us that they are confident in the national small business environment, and, just as encouraging, most have confidence in their local environments as well,” Jessica Moser, senior vice president at MetLife, stated in the report.

“This bodes well for the U.S. economy, as small businesses are consistently an engine for growth all across the country: purchasing equipment and inventory, paying taxes, and employing ever-increasing numbers of individuals.”

Most entrepreneurs borrow money for business expansion, which includes job growth. Other motivators include purchasing new equipment, keeping up with local competition, upgrading facilities, and buying inventory. Only 11 percent of business owners indicated that the financing was needed to keep the business afloat, according to the survey.

More than 96 percent of the businesses in the country are small, and they employ about half of the American workers.

Small-business credit was hit hard during the last recession. Over-regulation following the 2008 financial crisis made it harder for banks to serve small businesses.

However, recent changes in the economic and lending environment present a dramatically different picture compared to what small businesses faced for almost a decade.

Financial institutions have started to loosen purse strings to small-business owners, and the lending environment has become more competitive.

Small-business loan approval rates increased within the past year, reaching a new high level in July, according to the Biz2Credit small-business lending index.

A strong economy, jobs market, and business optimism create an atmosphere that is ripe for small business lending, stated Biz2Credit CEO Rohit Arora in a report.

“Business owners continue to invest in their firms and are finding success in securing capital,” Arora said.