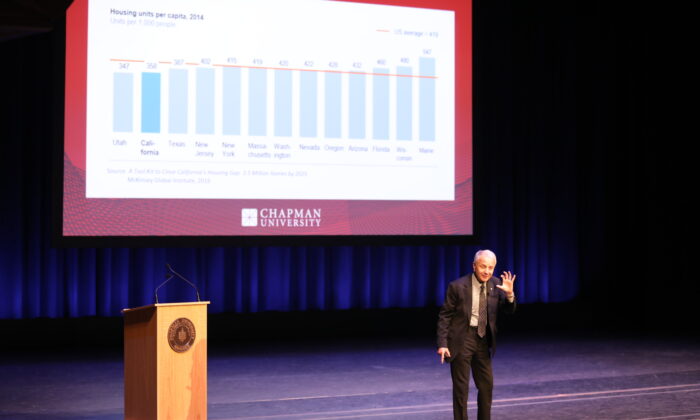 Strong CA Economy in 2022 Before Potential Recession in 2023: Chapman Economist

Californians may see a strong economy in 2022, but the possibility of a recession in 2023 lingers, President Emeritus and Economist James Doti said during Chapman University’s 44th annual economic forecast on Dec. 14.

As pandemic restrictions for businesses dwindle, California anticipates job growth of 4.2 percent in 2022 in comparison to 3.5 percent nationwide, according to Doti.

With the state economy bouncing back from COVID-19 job losses witnessed in 2020, 17.2 million jobs would be generated by the end of 2022, slightly below the 17.7 million jobs pre-recession, according to Doti.

The growth of international Pacific Rim trade is leading to an increase in employment opportunities as goods are being exported at the Los Angeles and Long Beach ports. For instance, U.S. imports from China increased by $303 billion, or 19 percent, from Sept. 2020 to Sept. 2021.

As for Orange County, the future is bright as job growth is foreseen to reach 5 percent, compared to 4.2 percent statewide and 3.5 percent nationwide in 2022.

Doti said Orange County has “come back stronger and in the past few quarters grew faster than California.” The county’s tourism and available jobs within the industry are also correlated with the county’s recovery.

In the past three years, the county’s population declined by 1.4 percent because of domestic migration—resulting in the shrinking of its 25-44 age group, from 28.3 percent of its population in 2010 to 24.7 percent in 2020.

Doti attributed California’s overall job growth to its pandemic rebound as the state policies move closer to protection against the coronavirus.

Despite a hopeful 2022, Doti said the state has “a slight possibility of a recession” in 2023 due to many factors, including less expansionary fiscal policy, increase in interest rates, and impacts of rising inflation.

Does California Have Enough Housing?

Though a statewide housing shortage has been widely claimed by officials, Doti presented a very different picture.

Data found showed the residential occupancy density stayed the same for the past decade—the average number of residents occupying per unit was at 2.94 in 2019, as it was in 2010.

Also, the state’s high housing prices are the result of an increase in median income levels and amenities, according to Doti.

In Orange County, Doti predicted the home prices to decline by 3 to 4 percent annually.