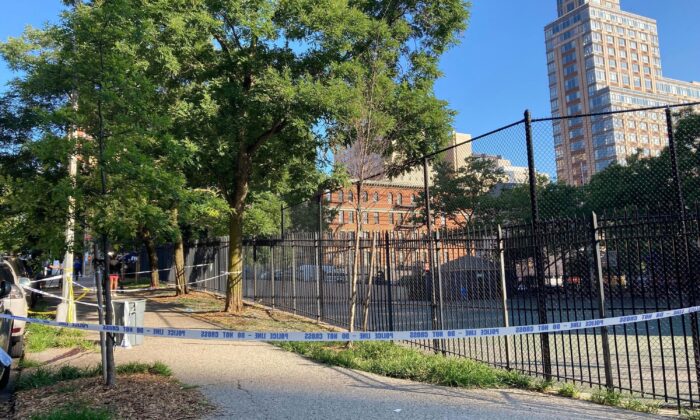 Police tape on New York's Upper East Side on June 30, 2022, where police say a 20-year-old woman was fatally shot Wednesday night while she pushed her infant daughter in a stroller. (Jennifer Peltz/AP Photo)
New York

NEW YORK—The ex-boyfriend of a New York City woman who was shot dead as she pushed their infant daughter in a stroller has been ordered jailed without bail, with prosecutors describing the killing as a “premeditated execution.”

Prosecutor Brittany DeCesare told Judge Eric Schumacher that on the night of the killing, Argro dressed in all black and wore a ski mask as he paced back and forth waiting to shoot Azsia Johnson, his estranged girlfriend.

“This case can only be described as a premeditated execution,” DeCesare said, according to The New York Post. “The defendant persuaded the victim to meet after work and under the guise that he wanted to give the deceased items for their 3-month-old daughter.”

Johnson, 20, was shot around 8:30 p.m. Wednesday near the intersection of Lexington Avenue and 95th Street on Manhattan’s Upper East Side. She was pronounced dead at a hospital.

The 3-month-old in the stroller was not hurt, but was taken to a hospital for medical evaluation, police have said.

Authorities allege Argro called Johnson’s family after the shooting to ask where his child was and threatened that another unidentified person was “next,” the Post reported.

Johnson’s family has said Argro routinely abused the mother of his child, beating her during her pregnancy and threatening to kill her.

Argro is set to return to court Thursday.