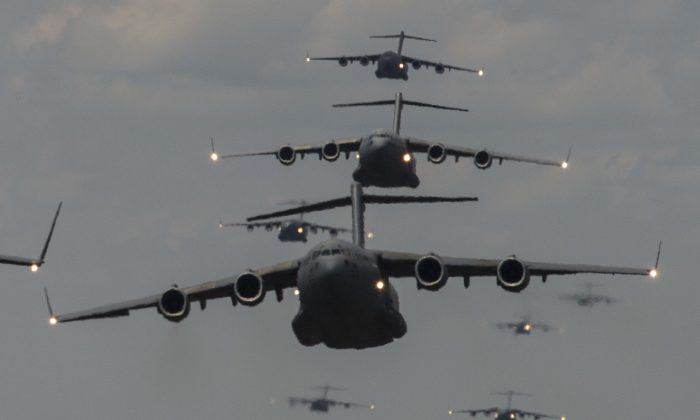 String of Low-Flying Lights Seen Across US May Be Explained

Flashing lights seen across the country this weekend prompted people to send videos and messages to local media asking if there were UFOs in the sky may be explained.

Joint Base Charleston told Charleston-based WLTX  that those lights were a group of C-17 cargo jets that were flying in formation from Charleston to Nevada on Saturday and Sunday.

A spokesman for the base told WLTX that a group of 17 jets from the 437th Airlift Wing took off from their base around 7 p.m. Saturday, Dec. 9, and were joined on the way by other air military installations and groups, including the 82nd Airborne.

In all, there were more than 40 C-17s from 10 bases and more than 20 C-130s from three bases that partook in a training exercise involving HALO drops, or high-altitude military parachuting.

The exercise was a final training exercise for the U.S. Air Force Weapons School located at Nellis Air Force Base in Nevada, a representative said, to allow mobility Air Force students to apply what they’ve learned over the last five months.

Witnesses called and wrote into Denver TV station KUSA to say they saw a string of slow-moving lights that appeared to be flying at a low altitude.

They asked if they were UFOs, or—one of the more creative explanations— if they were Santa’s scout elves on their way back to the North Pole.“Much more creative solutions for what the answer turned out to be,” KUSA reporter Jacob Rodriguez wrote.

A video of the lights, uploaded to YouTube by Denver’s South Metro fire’s representative, has since been removed. The video was taken from his home in Littleton, Colorado, KUSA reported.