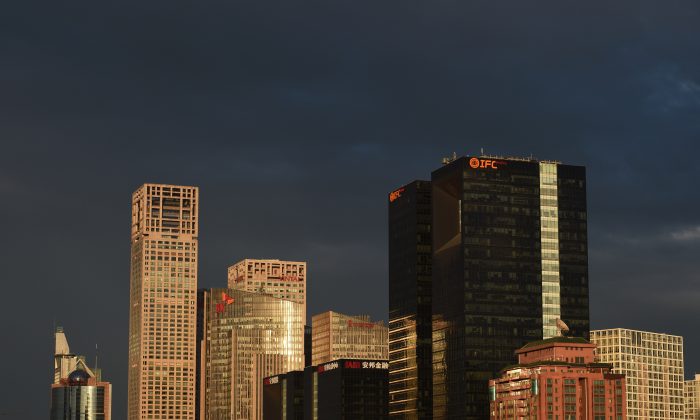 Buildings are seen in the central business district in Beijing on June 6, 2014. After years of boom that have seen prices rocket, the prospect of a bust is looming over China's vast property sector, with authorities hoping to avoid a meltdown that could send shock waves through the world's second-biggest economy. (Greg Baker/AFP/Getty Images)
Opinion 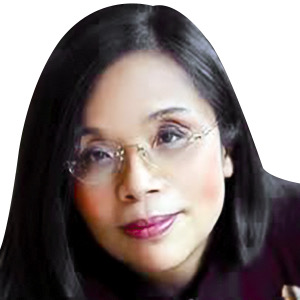 It is a hidden rule generally observed by the international business sector and investment banks that for the sake of interests, kowtowing to Beijing, whether willingly or reluctantly, would be necessary. This hidden rule is later observed also by the education sector, the hundreds of China-funded Confucian Institutes that opened up in universities around the globe are one example.

But what has taken me aback is that even the freedom of speech of American high school students is infringed and constrained by this hidden rule.

American Teenager Crashed Into the Wall of Censorship in Beijing

Various forms of exchanges between the U.S. and China increased in recent years, and they spread well into the domain of secondary education. Henry DeGroot, an exchange student from Newton North High School, Boston, went to Beijing Jingshan School to study for a semester, which happened to coincide with the 25th anniversary of Tiananmen movement in 1989.

After writing on a Chinese student’s notebook a few pro-democracy phrases, such as “Democracy is for cool kids,” “It’s right to rebel,” and “Don’t believe the lies your school and government tell you”, DeGroot was given a five-hour detention at his school in China; he was also barred from his prom at Newton North at the end of the semester.

This was not the first instance China detained kids for mentioning the unspeakable. In September 2013, Yang Hui, a year three student of Zhangjiachuan Junior High School in Gansu, was criminally detained for his comments on the internet. The news that a teenager was penalized for his speech attracted nationwide criticism, and the local police eventually let Yang go without charges after locking him in for seven days.

In view of the immense pressure inside China, administrators of Yang’s school would naturally refrain from defending him. Instead, they expelled Yang while he was in detention. Yet Newton North High School, though situated in Boston, America, the land of freedom, did not denounce the appalling move of the Chinese side and punished him further, claiming that the student violated semester abroad rules, and “showed so much disrespect for the Chinese that the longstanding relationship with the school may be harmed”.

The actions of Newton North indicated that the high school is willing to forsake the principle of free speech as guaranteed by the U.S. Constitution. DeGroot was very disappointed for not being able to join his prom. He thought the school officials abridged his rights and added that while all along Newton North preached the importance of civil disobedience and of speaking ones’ mind, he got penalized when he put these into practice.

People living in China are born without freedom. For example, Zhao Huaxu, a sophomore in Beijing International Studies University (better known among Chinese as Beijing Second Foreign Language College), disseminated information about the June-4th incident in 1989 on the internet and got criminally detained by the police “in accordance with the law”.

Rather than the autocratic China being influenced by the values of freedom and democracy of the U.S., the result of cultural exchange between America and China is that teenagers who are born with freedom come to realize the unreasonable character of autocracy and the feeble nature of “democracy”. It is an inalienable right of teenagers growing up in the American society to enjoy the freedom of speech, just like air and water. Yet in China, the freedom of speech is a luxury for which their personal freedom would be the price.

Is Interests Coming on Top of the Universal Value of Freedom?

Newton North Superintendent David Fleishman sidestepped the critical issue of whether students should freely express their thoughts. “The problem is not that the 18-year-old expressed his opinions but that he did so on a school-sponsored semester in China, violating a code of conduct clearly spelled out to students before they left,” Fleishman said.

What Fleishman said sounded somewhat convincing on first impression and was quite enough to fool some of the people. Yet for those who are familiar with the developments of U.S.-China relations in recent years, the Newton North incident would remind them of another incident that bore resemblance to this.

In February 2006, four internet giants were summoned by Congress for inquiry, the reason was that these companies “obeyed Chinese laws” and helped the Chinese government to control internet discourse. That inquiry should serve as a moral compass for subsequent incidents of similar nature.

Upon entering the Chinese internet market in large number, U.S. companies were forced to comply with demands from the Chinese government (i.e. they were made to obey Chinese laws) and helped filtering information to gain a foothold in the country. Yahoo! was accused of being a collaborator of the Chinese government in several incidents, some of which are as follows. First, Yahoo! aided the Chinese police and handed over to the authority the internet usage data of dissident Li Zhi, which resulted in Li being charged with “inciting subversion” and sentenced to eight years imprisonment in December 2003. Second, the company assisted China in the arrest of dissident Shi Tao, who was sentenced to ten years imprisonment for “providing state secrets to foreign entities” in 2005.

On February 15, 2006, the Committee of International Relations of the U.S. House of Representatives held the second session of a hearing entitled “the Internet in China: A Tool for Freedom or Suppression?” and summoned internet giants such as Microsoft, Google, Yahoo! and Cisco for an inquiry into their roles in helping the Chinese government to filter information.

Senior management of Yahoo! laid out their reasons, stating that they had to abide by the Chinese law to do business. Google and Microsoft also admitted that they complied with the censorship demand from the Chinese government and filtered words the Chinese government deemed politically sensitive. However, Google was convinced that such concessions were worth making because, even though they agreed to some restrictions, their presence in a country with a population of 1.3 billion expanded the channels through which the Chinese people obtain information.

Likewise, administrators of Newton North could of course insist that, to enable the continuation of exchange with China’s education sector, some concessions would be necessary. Nevertheless, what this high school gained was insignificant and it came with the price of forsaking the same principles the four internet giants disregarded for access to the Chinese market.

If each and every U.S. institutions complies with those Chinese laws (or contracts) that are in direct conflict with American values, then how great the damage would be to these values? The way Newton North handled this incident was tantamount to telling its students that while the high school teaches the principle of “civil disobedience” and that every person has the right of free expression, its students should learn to give up their principles and keep their heads down when they are in autocratic countries because: interests matter most.

All About Interests in China

There have been innumerable instances where principles were disregarded for the sake of interests. A recent example is the over 30 billion dollars worth of business contracts Chinese Premier Li Keqiang brought with him as he visited Britain. While Britain was overjoyed with this, it was strongly reminded by China’s Ambassador to the U.K. Liu Xiaoming not to criticize the People’s Republic over human rights issues if it wants to maintain close economic cooperation between the two countries. Another example came when The New York Times published on June 12 a report entitled “Hong Kong Media Worries Over China’s Reach as Ads Disappear”. The report went that “two London-based banks, HSBC and Standard Chartered, ended longtime advertising relationships late last year with Apple Daily, after being told to do so by the Chinese government.”

Although both banks said their advertising decisions were commercial, commercial director of Next Media Limited Mark Simon claimed in an interview with the Times that the real reasons were the pressure from the Communist authorities, which purpose was to muzzle “Hong Kong media organizations critical of the mainland”.

The only thing to get in return for submission to autocratic countries is their disdain. Major European powers have all along been submissive to China’s “order diplomacy” out of economic considerations. After the financial crisis in 2008, orders from and opportunities for economic cooperation with China became particularly valuable “cheese” for France, Germany and the U.K. With full understanding of this, Beijing changed its propaganda strategy from running articles inside China recounting the “hypocritical human rights diplomacy of the West” to open criticism. For instance, on June 6, 2013, the People’s Daily ran a piece that told Europeans to drop their “deep-rooted condescending mentality” because times changed, and the balance of power shifted; the “European Union should recognize the fact of their decline” (italic words added by the author).

After what Newton North High School senior Henry DeGroot had gone through in Beijing came to light, all sectors of the U.S. should act, and give serious thoughts about values and principles that must not be abandoned.

After all, countless incidents have shown that striking a deal with Mephistopheles won’t end well.

He Qinglian is a prominent Chinese writer and economist living in the U.S. She is the author of “China’s Pitfalls,” which concerns corruption in China’s economic reform of the 1990s, and “The Fog of Censorship: Media Control in China,” which addresses the manipulation and restriction of the press. She regularly writes on contemporary Chinese social and economic issues. This translation is an edited version of a translation that first appeared here. Read the original article at the Voice of America, Chinese edition.