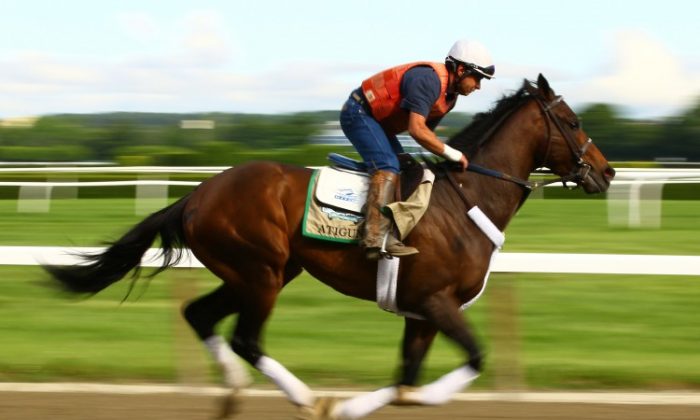 Atigun gallops during a morning workout at Belmont Park on June 5, in Elmont, New York. (Al Bello/Getty Images)
US

NEW YORK—Horse racing fans looking forward to the Belmont Stakes in Elmont this Saturday may have their race-day plans affected if some maintenance workers go on strike.

Union members from the International Brotherhood of Electrical Workers Local 3 (IBEW) recently agreed to strike at the three New York Racing Association (NYRA) tracks but have not confirmed when the strike will begin, Vincent McElroen, financial secretary for the IBEW told the Daily Racing Form.

The union is protesting a 30 percent reduction in wages and benefits from the NYRA. Current retired workers receive health benefits, but NYRA plans to cut off health benefits for future retirees.

The union consists of 130 to 150 maintenance crew workers for the NYRA, including the starting gate crew.

“NYRA must address this extraordinary obligation to secure the long-term financial health of the company, which directly employs 1,300 employees and supports tens of thousands and jobs throughout the state,” the union said in a release.

According to NYRA, its retiree medical benefit liability has doubled in the past three years, from $61 million in 2008 to $121 million in 2011.

“Local 3 is unwilling to pay a reasonable share of the cost to provide these benefits and they refuse to work with us to create shifts that reflect the reality of how a race track operates,” said NYRA.

NYRA Director of Communications Dan Silver told The Epoch Times that the NYRA has been actively negotiating in good faith with the union since February 2010, when their contract expired.

“It is very troubling that … NYRA employs approximately 130 Local 3 maintenance workers who believe their demands are more important than an historic day for 100,000 fans,” Silver said.

The union has claimed that a strike would not affect the race. “Whether it’s our guys putting the horses in or a bunch of scabs, it’s going to happen,” said McElroen, according to New York Daily News.