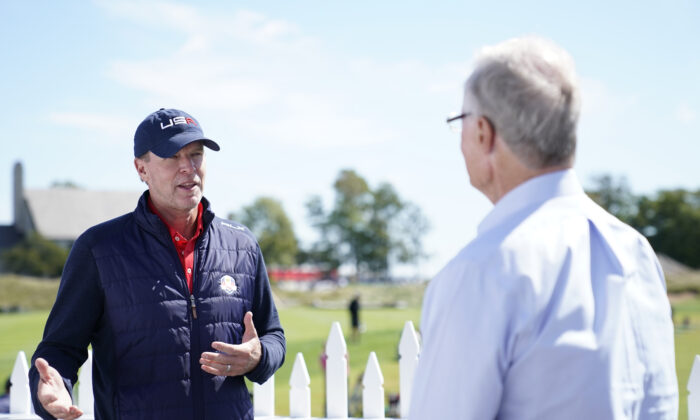 The U.S. Ryder Cup team was finally revealed as Steve Stricker named his six captain’s picks on Wednesday, which includes a mixture of obvious choices.

The captain filled out the remaining spots with Xander Schauffele, Tony Finau, Jordan Spieth, and Harris English. They were the next four in the Ryder Cup standings. The other two picks went to Daniel Berger and Scottie Scheffler.

Schauffele, the 27-year-old California native who won gold at the Tokyo 2020 Olympics, is set to compete in his first Ryder Cup that will take place from Sept. 24 until Sept. 26 at Whistling Strait in Wisconsin.

“We are super-excited about these six individuals. I talked to each and every one of them a couple of days ago and they are extremely excited and happy and fired up to be part of this team,” Stricker said of his picks. “All a great fit for Whistling Straits. They all can’t wait to do one thing and that’s to bring the cup back where it belongs.”

Scheffler becomes the first American to be picked for his first Ryder Cup without having won on the PGA Tour since Rickie Fowler in 2010 at Wales. Scheffler has been a steady presence, was runner-up at the Dell Match Play in March, and is number 21 in the world. He finished 14th in the Ryder Cup standings.

Among the six automatic qualifiers, two-time major champion Morikawa and FedEx Cup champion Cantlay have never played in the Ryder Cup. The four picks who will make the Ryder Cup debuts are Schauffele, English, Berger, and Scheffler.

The six rookies are the most for the Americans since there were six on the 2008 team that won at Valhalla.

“We’re looking for the best players to perform here and these six guys fit Whistling Straits to a tee,” Stricker said while addressing the subject of having six rookies. “We’ve done some analysis of those rookies since 2008 and U.S. rookies have a 40-29-17 record in Ryder Cups and they fare very well in this type of format.”

One notable player not on the team is former Masters champion Patrick Reed, who has a 7-3-2 record in the previous three Ryder Cups and is undefeated in singles, but he couldn’t play the final two qualifying events while being hospitalized with pneumonia.

“I kind of lost sleep over that one … He’s a tremendous competitor, he brings a lot to match play golf and his record here at the Ryder Cup is pretty darn good,” Stricker said about Reed not being named. “It was a very difficult call, it wasn’t an easy one. But it was just the uncertainty, really, of his health and really the lack of play that led to our decision,” he added.

Europe’s qualifying ends after this week’s BMW PGA Championship in England, and then Padraig Harrington announces three captain’s picks. Europe is not only the defending champion, it has won nine of the last 12 times dating to 1995.