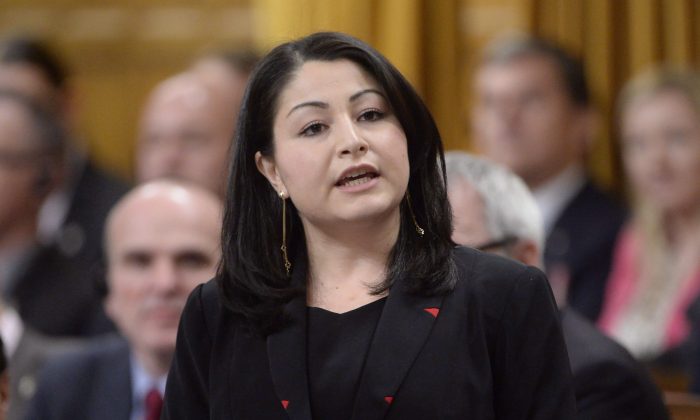 Democratic Institutions Minister Maryam Monsef answers a question in the House of Commons on Dec. 9, 2015. THE CANADIAN PRESS/Adrian Wyld
Canada

Reforming how a country’s democratic system works is no easy task, nor is the job of running a government department for the first time, but Maryam Monsef takes on both as Canada’s new Minister of Democratic Institutions.

In a year-end interview with the Epoch Times, the first-time Member of Parliament discussed her goals in her new job—one of which is to strengthen the respect Canadians have for the country’s democratic institutions.

“Being from a place where democracy is but a dream, I have a real respect and appreciation for the democratic institutions in this country that allow the transition of government without violence or interruption,” said Monsef.

“I have a great deal of respect for them and I intend to enhance people’s respect and appreciation for them.”

Monsef’s background is somewhat unique among cabinet ministers in the new government in Ottawa. She is Canada’s first Afghan-born MP, and at age 31, is also the youngest.

Monsef fled Afghanistan with her widowed mother and two sisters when she was just 11 years old. The family settled in Peterborough, Ont., where she later attended Trent University.

She has worked with several non-profits in the Peterborough area, including the Young Women Canada Association and the Ontario Public Interest Research Group. She was also co-founder of the Red Pashmina Campaign, a campaign to help Afghani women.

That background will come in useful for her current position, she said.

“I learned from them the importance of collaboration across cultures, generations, and across sectors. I think that is one of sets of experiences I am bringing to this portfolio that will require a great deal of engagement across the country.”

What I am most excited about this portfolio is having a meaningful conversation with Canadians coast-to-coast.
— Democratic Institutions Minister Maryam Monsef

Monsef is not new to politics. Prior to becoming an MP, she ran for mayor in Peterborough, pledging to have more community engagement, and finished a respectable second with 9,879 votes compared to incumbent mayors Daryl Bennett’s 11,210 votes.

“My campaign for mayor and MP benefited greatly from the involvement of young people,” she said, adding that getting more young people out to vote is one of her priorities.

“One of the things that is important for me is to continue to cultivate the level of enthusiasm among young people who may not be able to vote. In some ways, they have the smallest voice at the table and the most at stake, which is one of the areas I intend to focus on both as an MP and a minister,” she explained.

Under her portfolio she will be tasked with making the Commissioner of Canada Elections more independent from government, establishing an independent commissioner to organize political party leaders’ debates, and, most importantly, begin work on electoral reform.

The Liberals have promised that 2015 will be the last federal election conducted under the first-past-the-post voting system.

Monsef acknowledges that while cynicism toward politics may be a challenge, she believes Canadians attitudes are changing. She is also optimistic about the possibilities that her new position can provide.

“What I am most excited about this portfolio is having a meaningful conversation with Canadians coast-to-coast, and that conversation I hope will enhance people’s appreciation and respect for the gift of democracy that we have in Canada,” she said.