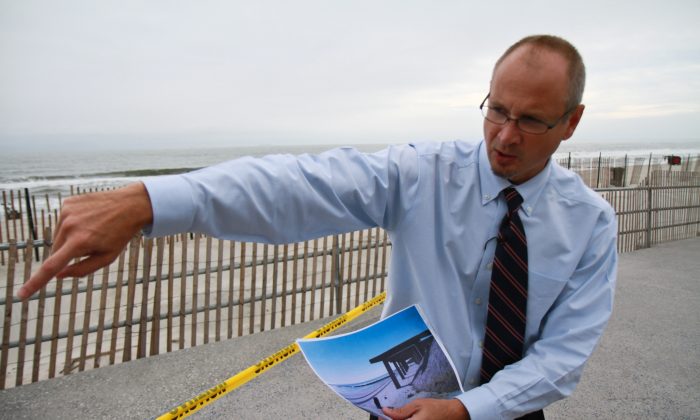 NEW YORK—The condition of the beach at The Rockaways, and the placid neighborhoods that line it, are a world away from the destruction of one year ago.

The Long Island peninsula known as The Rockaways was almost entirely underwater during the terror of Hurricane Sandy. Cars, parts of the sea wall, and pieces from the boardwalk floated down the streets like toys. Parts of the miles-long stretch of shoreline were decimated.

“As the night went on, the water kept coming,” recalled Tasso Calakos, speaking from outside of his home on Rockaway Beach 133rd Street in the neighborhood of Belle Harbor, where he has lived for 20 years with his wife and three children.

Though Calakos said he is not sold there will ever be another Sandy in his lifetime, the U.S. Army Corps of Engineers beach rebuilding and reinforcing project near his home is a certain comfort.

That’s because the mountain of sand you can see from his front yard is the first line of defense between his home and the ocean. The same is true for thousands of other homes that line the shore on this narrow peninsula.

The Corps started rebuilding and enlarging the beach this summer—a project they envision will ultimately restore the beach to its prime 1970s condition. Over the years, natural wear and tear had led the beach to deteriorate.

The sand will also be the first line of defense against storms by absorbing the force of the waves and tripping them up farther away from shore.

When all is said and done, the Corps will have placed a total of about 3.5 million cubic yards of sand, which it dredged from nearby, onto the shoreline from Rockaway Beach on 19th Street, to about Beach 149th Street in Neponsit.

“By next Memorial Day, it will be a very big beach,” said Daniel Falt, project manager for the beach restoration, as he stood on the sand off Beach 97th Street on Oct. 16. “The beach gets battered, so it really does need a lot of protection.”

Falt noted that a few days earlier, weekend storms had battered the coast, leaving a jagged sand cliff halfway down the shore called scarping. He said in time the sand will mold back into the landscape as a sloping hill.

The Corps’ approach is long-term. In addition to The Rockaways, it is engaged in shoreline projects on Staten Island, Coney Island, and Seagate.

“This is just one piece of a giant puzzle,” said Falt, who personally felt the fury of Sandy and its aftermath as an area resident.

Falt said it was incredible to experience so much destruction at the same time.

“I equate it with flying in the airplane and a gauge goes wrong,” he said. “With Sandy all the gauges went wrong.”

He and the Corps hope that their work remaking Rockaway Beach will give much-needed protection so that next time something
will be in place to protect resident.

In the process, though, the Corps is aware of some community concerns about the large-scale project.

“It interrupts beach activities when we close [the beach] 1,000 feet at a time,” said Falt, who added that when sand is first placed, it can also temporarily disrupt surfing (of which he is an avid participant). “Most people are fine with sand, but it’s been a very difficult process to make everybody happy.”

For the city’s part, a sturdy cement boardwalk has been installed to replace the wooden one that was destroyed in the storm.

Although some residents may prefer the more old-fashioned boardwalk, they are realistic about its vulnerabilities.

Arthur Bevan, co-owner of Sweet Serenity Cupcakes near Beach 140th Street, lost all of his personal possessions in the storm.

Bevan said that although the recovery has been excellent, residents understand there will be certain concessions in the ongoing process of rebuilding. The beach is a case in point.

“A lot of people don’t want a cement boardwalk,” said Bevan. “But the [wooden one] didn’t work out too well before.”