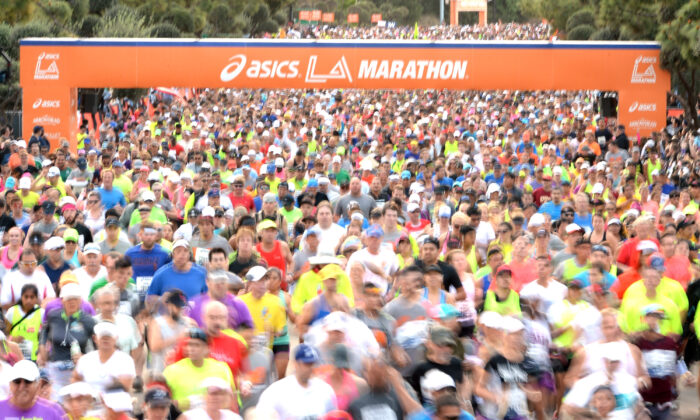 Streets, Freeway Ramps to Close for the 2021 LA Marathon

LOS ANGELES—A host of streets and freeway ramps will be closed Nov. 7 to accommodate the 36th annual Los Angeles Marathon.

This year, the marathon will follow a new route from Dodger Stadium to Century City.

The race will start at 6:30 a.m. Runners will then head through downtown Los Angeles, Echo Park, Hollywood, West Hollywood, Beverly Hills, Century City, Westwood, Brentwood, and back to Century City.

Most of the closures will begin at about 4 a.m. Streets on the early parts of the course will reopen once all runners pass and the roadways are cleared. Many streets will be reopened by 1 p.m., with the exception of those near the finish line, where closures will continue until 5 p.m.

The marathon is requiring proof of full vaccination or a negative COVID-19 test for all participants, staff, volunteers, media, and spectators entering the starting area at Dodger Stadium.

Face coverings will also be required in the starting area, and will be recommended in all other areas.

Race participants will have to submit their proof of vaccination or negative test on Friday or Saturday at the event’s Health and Fitness Expo, and they will receive a verification band.

Los Angeles County’s public health director Barbara Ferrer said during a Nov. 4 online media briefing that organizers of Sunday’s marathon have been working with health officials “to plan for this event to be as safe as possible.”

“They’ve made a lot of modifications so that the runners will be safe,” Ferrer said. “And, of course, in terms of spectators, it’s up to all of us to keep our distance if we’re in crowded places, as always. … It’s a long route, so people have plenty of opportunity to spread out.”

Last year’s marathon was held just as the COVID-19 pandemic was unfolding, and this year’s race was pushed back as the virus continued to spread.

“So I feel comfortable,” she said. “It’s an outdoor event. The biggest issue with outdoor events is just when there’s a lot of crowding for a long period of time, so hopefully spectators avoid being in those situations. And I know the marathon organizers have really gone to great lengths to limit
the amount of crowding that’s going to happen among the runners.

“The good thing is, when they’re running, they’re often not very close to everybody else for extended periods of time, and that too will make it safer for the athletes.”