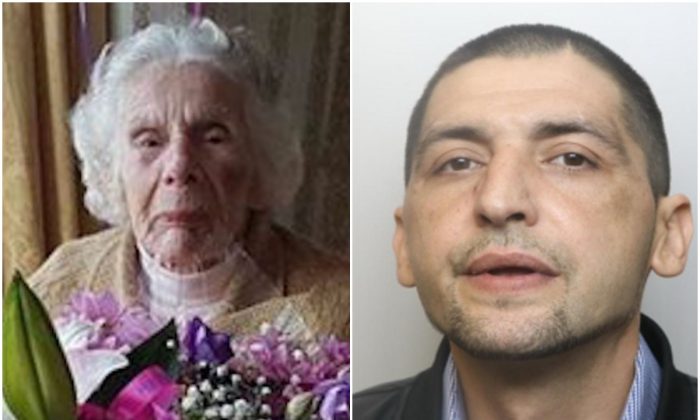 A heroin addict who broke the neck of a 100-year-old holocaust survivor when he mugged her on the street has been jailed for 15 years over her death.

Artur Waszkiewicz, 40, was convicted of manslaughter and robbery on Feb. 14 for attacking Sofija Kaczan as she took her regular stroll down the street near her home in Derby, England. He pushed her from behind, stole her handbag and left her bruised and bleeding on the sidewalk.

Kaczan, who moved to England in 1948 after surviving the Nazi occupation in Poland, died two weeks later of pneumonia brought on by her injuries.

Police officer Darren De’ath, who led the investigation into the incident, said in a statement, “She was an incredible woman, who was well known and much loved in the community.”

“Having just celebrated her 100th birthday she was in remarkable health—and was seen regularly walking to the church close to her home in Normanton,” he continued.

It was on one of these walks that tragedy struck.

According to the Crown Prosecution Service Waszkiewicz approached Kaczan from behind on May 28, hit her on the back of the head and pushed her to the ground, breaking her neck, and causing multiple injuries.

He left with her handbag, which he later discarded, but only after leaving a vital piece of incriminating evidence inside it—a fingerprint on a receipt.

Waszkiewicz changed his appearance to avoid arrest, before police eventually caught up with him. His attempt to apparently flee and change his appearance, shaving off his hair, was used as evidence of his guilt.

Kaczan, who had been in good health before, died on June 6.

The Judge, Nichoas Dean QC said Waszkiewicz had shown no concern for his quarry, only caring about satisfying his craving for heroin.

“True to your nature as a petty criminal and heroin addict, this was opportunist crime of the meanest, most despicable type,” he said, reported the BBC.

Judge Dean added, “There is tragic irony in the fact that Mrs Kaczan had survived the unimaginable horror of a Nazi concentration camp and slave labour, as well as imminent execution, only to meet her end because of the cowardly and sordid actions of a petty criminal and drug addict on the streets of Derby.”

She Prayed For and Forgave Her Attacker

Lynsey O’Donnell of the Crown Prosecution Service said that the jigsaw of evidence “showed no one else could have carried out the attack.”

Other footage showed a car arrive at the scene, which became a vital lead for police and was later linked to Waszkiewicz.

Police were able to use reflections in car windows and house windows, caught on CCTV, to show a figure getting out of the car and crossing the road toward Kaczan.

Her abandoned handbag was found several hundred yards away, containing a receipt with Waszkiewicz’s fingerprint on it.

When police caught up with Waszkiewicz, they found him hiding under the bed at his mother’s home in London, where he had fled after shaving his head to change his appearance.

After the attack, and before she died from her injuries, Kaczan had prayed for and forgiven her attacker.