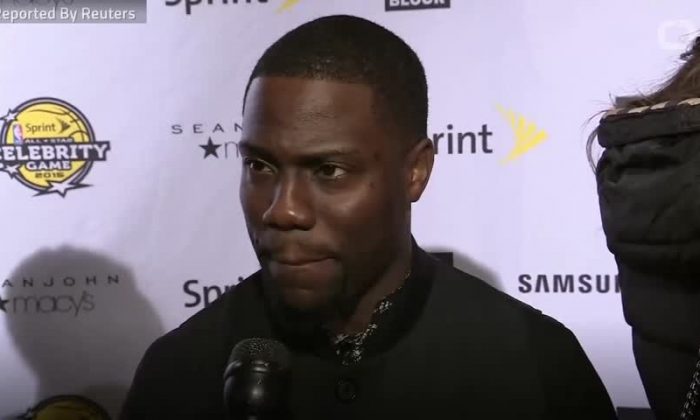 A street artist has been accused of posting fake Oscars ads around Hollywood, criticizing the Academy Awards in the midst of actor Kevin Hart’s uncertain hosting status at the Oscars.

The posters claim “The Oscars Have No Hart,” along with the date and time of the event, and the ABC logo, next to a picture of Kevin Hart’s face. The artist, who uses the alias of Sabo, hung most of the posters near the Dolby Theater in Hollywood, which will be the Oscars venue on Feb. 24 according to The Hollywood Reporter.

I know who I am & so do the people closest to me. #LiveLoveLaugh

Sabo has produced a number of provocative street art pieces, often including political messages as a way to counterbalance the liberal, leftist deluge of messages in the media and street art, according to his website called Unsavoryagents. After he set up a street art campaign targeting Facebook head Mark Zuckerberg, and posted a picture of his creation on Facebook, his account was banned according to Forward. His poster included the text “[expletive] Zuck 2020.”

The link to Sabo’s Twitter account shows a message that it is suspended. An article in The Wrap indicates that Sabo’s account was suspended with no explanation or time frame for the suspension.

“I don’t think the tech companies are trying to shut The Right down, I know they are,” Sabo told TheWrap. “They are developing an entirely new language to demonize anyone who does not think like them, then de-platform them in hopes of their networks not being there for us during the midterms or for the election of 2020. But they, like the goons in Hollywood, overestimate their importance.”

Sabo joined the debate about Hart after backing out from hosting the Oscars. He made controversial jokes on Twitter years ago, which were accused of being offensive to homosexuals and recently publicized again. Hart’s dream to host the Oscars was ruined in a matter of days.

Hart announced via Instagram on Dec. 4 he had been invited to host the Oscars. On Dec. 6, he addressed media reports in a video apparently recorded while he laid in bed during the Australia leg of his Irresponsible Tour.

“Stop looking for reasons to be negative … stop searching for reasons to be angry,” he wrote in the text area of the Instagram video post. “If u want to search my history or past and anger yourselves with what [yo]u find that is fine with me. I’m almost 40 years old and I’m in love with the man that I am becoming.”

In another Instagram video on the same day, he explained how the Academy Awards asked him to apologize for the old Twitter posts or they would find a new host.

He then continued to say if he loses the opportunity to host for not apologizing then so be it. A day later he sent apologetic Twitter posts while, at the same time, announcing he is voluntarily stepping down.

Many fellow comedians, celebrities and visual artists have expressed that the controversy is neither justified nor should Hart have to step down. The Oscars have yet to announce a replacement host.