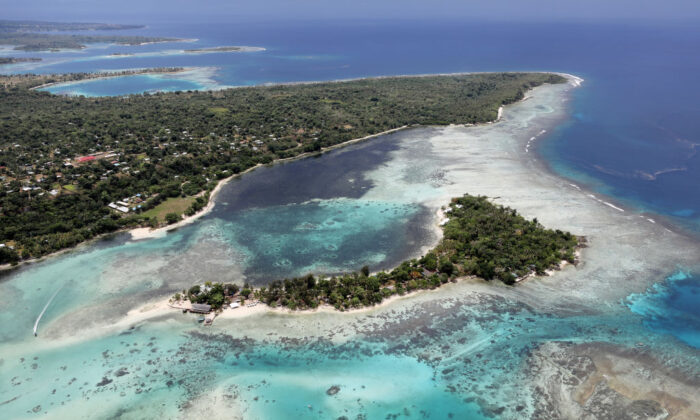 An aerial view of Erakor island and the coastline of Port Vila, Vanuatu on Dec. 7, 2019. (Mario Tama/Getty Images)
Asia & Pacific

The Pacific nation of Vanuatu will go to the polls next month after the Parliament was dissolved so that Prime Minister Bob Loughman could avoid a no-confidence vote.

Loughman has faced pressure for months after attempting to change the Constitution to extend his government’s term limit, the move also comes amid an ongoing influence push by Beijing in the region.

On Aug. 18, Vanuatu President Nikenike Vurobaravu signed the notice to dissolve Parliament—the next elections were due in 2024. Opposition MPs challenged the move in the country’s Supreme Court, saying the advice received by the president from the Council of Ministers was “invalid and unconstitutional.”

On Sept. 8, the Court handed down its judgement affirming the dissolution and for elections to go ahead.

In its reasoning, the Court cited an earlier case saying the right of MPs to “express an unfavourable opinion” on the government’s leadership did not take precedence over advice from the Council of Ministers that the Parliament should be dissolved.

“We are of the view that the right of the people of Vanuatu to democratically express their view in the election of a new Parliament must be accorded priority,” said Chief Justice Vincent Lunabek in his judgment.

The judge also said there was “insufficient evidence to support the unlawfulness and unconstitutionality” of the advice from the Council.

A spokesperson for the prime minister, Fred Vurobaravu, welcomed the ruling.

“The government believes that the best option [going] forward is to reset through the snap elections,” he said in comments obtained by AFP, noting there would be “no guarantee for stability” had the opposition won the case.

The former leader of the opposition Ralph Regenvanu is considering appealing the ruling.

“We are worried about the precedent … We will wait to thoroughly study the written judgement and see if we want to appeal the decision or just proceed with the snap elections.”

In June, Prime Minister Loughman attempted to extend term limits from four to five years and allow foreign nationals to hold office—there is a large population of Chinese nationals in the region.

However, the prime minister was forced to shelve the constitutional amendments after opposing MPs simply did not turn up, leaving Parliament with only 31 of 52 MPs, which forced the session to be cancelled. A quorum of 34 MPs is required for Parliament to proceed.

The incident is the latest episode in the ongoing geopolitical tug-of-war in the South Pacific region that has seen Beijing-linked MPs or political leaders put increasing strain on the democratic institutions in their country.

For Beijing, interest in the region emanates not so much from economic opportunities but strategic possibilities, including potential militarisation of the area, as well as a chance to further isolate Taiwan from its few remaining official diplomatic partners.

The zone was slated to provide economic opportunities but was opposed by then-President Hilda Heine over money-laundering concerns and because it could become a backdoor for China to exert control over the country.