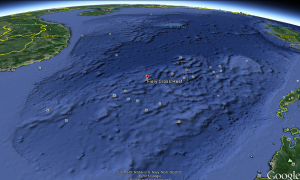 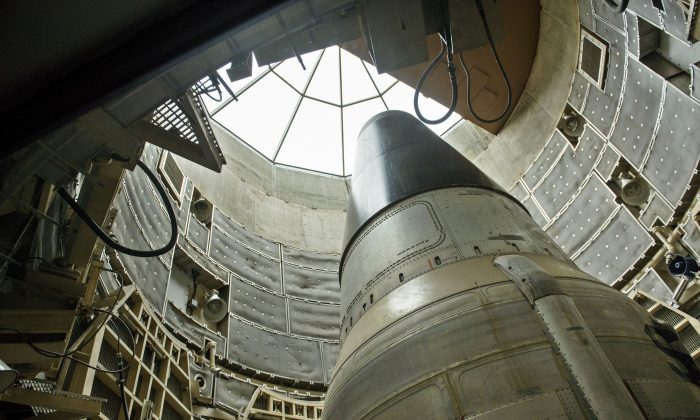 A deactivated Titan II nuclear ICMB is at at the Titan Missile Museum in Green Valley, Ariz., on May 12, 2015. (Brendan Smialowski/Getty Images)
China

The US Is Hiding Its Nukes so Poorly, It Undermines the Point of Having Them

The United States has a growing weakness in its nuclear arsenal of defensive intercontinental ballistic missiles (ICBMs), and some experts warn the gap is a serious vulnerability in U.S. defenses.

“Right now, the American land-based ICBM force is particularly vulnerable because it is over targeted by Russian and Chinese ICBMs,” said Richard Fisher, senior fellow at the International Assessment and Strategy Center, in a phone interview.

The problem, he said, is that U.S. nuclear weapons sites have moved little since the Cold War. Plans to create mobile defense systems that can be moved and hidden were likewise scrapped in efforts to reduce the U.S. nuclear arsenal.

“We’re just not hiding them,” Fisher said, noting that even a hobbyist using Google Earth could spot most of the land-based nuclear sites in the United States.

With China, in particular, the opposite is true, and much of its nuclear force is hidden away in forests and underground bases. In the nuclear defensive arena where the only “security” is the assurance of mutual annihilation, the idea that someone could destroy a nation’s nuclear weapons and have enough left over to destroy its population centers isn’t an idea that’s taken lightly.

“If you look at new Chinese bases, it is quite easy to conclude that China is building up to the capability to pre-emptively strike our ICMB fields,” Fisher said.

“We are on the road toward a near-term scenario in which we will be vulnerable to strategic blackmail,” he said.

Fisher isn’t alone in his concern. A secret chapter from Australia’s 2009 Defense “White Paper” was leaked in a 2012 book by Australian journalist David Uren, “The Kingdom and the Quarry: China, Australia, Fear and Greed.”

News of the chapter caused a stir in Australia, where its leading newspaper, The Australian, ran a front-page story with the headline “Secret ‘War’ With China Uncovered.”

It caused much less of a stir in the United States, even though its release came just several months after President Barack Obama announced the “Asia Pivot” aimed at countering China’s new assertiveness. But its content very well should have. The leaked chapter detailed the Chinese regime’s plan for military action against the United States.

The first step in the plan, it states, was to “blind the U.S. surveillance and reconnaissance systems and damage command, control, and communications networks with cyber, missile, and space attacks.”

“Then launch large pre-emptive attacks on U.S. and Japanese bases and forces with missiles, aircraft, and special force raids, possibly extending to facilities in Australia,” it states.

And while this unfolded, “There would be multiple missile and submarine attacks on U.S. naval vessels. Finally, PLA [People’s Liberation Army] units would aim to destroy more distant support forces from Hawaii to Alaska, Singapore, and Australia.”

The overall goal of such an attack, the document stated, would be a scenario much like what Fisher warned the United States is becoming vulnerable to: that the Chinese regime would launch an all-in, aggressive attack meant to force the United States to the negotiation table within a short time-frame.

Fisher said, “It is not inconceivable that in a crisis or should a strategic opportunity present itself, that Russia and China would join forces in presenting a threat to Washington that would require a major strategic defeat or concession from Washington.”

“The United States is now vulnerable to multiple, very real threat vectors,” he said. “Quite frankly, one cannot conclude that our national leadership is capable of responding sufficiently to protecting the United States.”

An attack meant to force the United States to the negotiation table might unfortunately be possible due to revisions in U.S. nuclear strategy.

The U.S. strategy for nuclear war between 1961 and 2003 was called the Single Integrated Operations Plan (SIOP). It was replaced by the Operations Plan (OPLAN), which was last updated in December 2008.

Chinese Companies Can Ignore US Courts. Here’s How

Early plans for U.S. nuclear defense were horrifying doomsday scenarios. Under the first version of SIOP, the United States had close to 2,400 sites in the Soviet Union targeted, which included cities, military bases, and nuclear facilities.

By the early 1980s, the strategy (SIOP-5) had closer to 40,000 potential targets for nuclear weapons, yet it came with a key shift in policy. It introduced a “tailored counterforce” of escalating strikes. It left room for negotiations between attacks.

While the possibility of negotiations would likely avoid a full-scale nuclear war, however, it also brings the possibility that a country could gamble on a first-strike targeting enough U.S. nuclear facilities to force the United States to the negotiation table.

Over time, the United States has also become lax with concealing key targets. A photograph was circulated in March 2013 showing five “first line” U.S. nuclear carriers docked together at Naval Station Norfolk, Virginia. The photo had allegedly been taken in December 2012 when crews of the carriers, surface ships, and nuclear submarines were given holiday leave.

Meanwhile, the Chinese regime is becoming more aggressive, and many experts believe the Asia-Pivot, is not strong enough.

In particular, a new report from the Council on Foreign Relations warns, “The existing nuclear balance between the United States and China should be maintained, as it is crucial to the U.S. posture in Asia.”

One of the main problems defense experts have when analyzing the nuclear threats from other nations: the nations of concern typically don’t tell other countries about their nuclear programs.

Analysis of nuclear threats is thus split between those who believe the official numbers given by countries like China, and those who do not. The analysis is then split again, based on whether or not they believe a given country would be willing to use nuclear weapons.

William Triplett, former chief counsel to the Senate Foreign Relations Committee and an expert on national security, said that while the risk of strategic blackmail is there, he doesn’t believe a country like China would be willing to do it.

“They’re putting all their bags outside the country,” said Triplett in a phone interview. He noted that a huge number of people within the Chinese elite have children attending U.S. universities, many have business ties with U.S. companies, and many more have friends and family living in the United States.

Triplett said if Chinese officials suddenly called all their kids home, “then I would get very worried.”

The guessing game about China’s intentions is something the Chinese regime has made necessary, according to Fisher.

The Chinese regime does not reveal anything about its disposition on nuclear weapons systems. “We know of them, and we can see them from on high or when they’re revealed on parades, and there are propaganda press offerings in the Chinese military media, which occasionally show images of these systems,” Fisher said. “But China as a policy rejects the notion that transparency leads to stability, and thereby safety.”

For example, a photograph of a new off-road missile launch truck was recently published in the People’s Liberation Army Pictorial, a Chinese military magazine. It said very little about the 16-wheel ballistic missile launch truck, and Western analysts were left guessing at its capabilities by piecing together what else is known about the Chinese regime’s nuclear programs.

While there are credible rumors the Chinese regime will soon deploy a new submarine-based nuclear launch system, the Chinese regime has said little about its new long-range DF-41 ballistic missile aside from confirming it held tests in December 2014. Then, there are the satellite images of the Chinese regime’s mysterious “Underground Great Wall” nuclear facilities, which are believed to contain 2,000 miles of tunnels, yet again leaving experts guessing.

“How much can you stuff into 3,000 kilometers (1,864 miles) of tunnels and caves?” Fisher said. “I would say a hell of a lot more than the roughly 250 or 300 nuclear weapons that most Western analysts credit the Chinese with possessing.”

“The Chinese simply make any kind of rational nuclear relationship impossible because of their tied down, absolute insistence on no transparency, thereby benefiting maximally from the deterrent effect of uncertainty on the side of their adversaries,” Fisher said.

“The Chinese also take a risk,” he said. “The less we know, the more we presume, and thus it’s possible to vastly overestimate China’s potential and thereby spark a buildup on our side.”

There are similar lacks of clarity with Russia on nuclear programs. The United States and Russia have been negotiating on nonstrategic nuclear weapons, yet according to a report from the nonpartisan Government Accountability Office, “the two nations have not moved forward with efforts to negotiate limits on these weapons.”

The negotiations are at a standstill, as Russia has stated “it will not even begin the process until the United States removes its nonstrategic nuclear weapons from bases in Europe.”

The Obama administration has set its eyes on reducing the U.S. nuclear arsenal. The New Strategic Arms Reduction Treaty (START) between the United States and Russia went into effect on Feb. 5, 2011. Under the agreement, both countries allow inspections of nuclear sites, disclose numbers and locations of weapons systems and facilities, and requires both countries to reduce their strategic nuclear missile launchers in half. It does not, however, restrict the number of stockpiled nuclear warheads.

Thus, the situation stands that while the United States is actively reducing its nuclear arsenal, and subjects its nuclear programs to heavy oversight both public and private, U.S. adversaries have been going the other way.

While the overall picture of nuclear buildup looks threatening, according to Hans Kristensen, director of the Nuclear Information Project at the Federation of American Scientists, it looks much less aggressive when viewed in context.

All nuclear states are modernizing, said Kristensen in a phone interview, and these efforts come in waves. The United States updated its nuclear weapons systems in the 1990s and early 2000s when it introduced the Ohio-class submarines and armed them with Trident-class nuclear missiles.

“In the ’90s we also introduced the B2 bomber, and in the latter part of the 2000 decade, we initiated this whole overhaul of the land-based nuclear fleet,” Kristensen said.

He acknowledged that while Russia and China are now increasing their nuclear arsenals, these also need to be viewed in context.

“Russia, when they came out of the Cold War, they were down on their knees, to put it lightly,” he said, noting it wasn’t until the late ’90s that Russia began replacing its dilapidated Soviet weapons systems.

Kristensen said part of Russia’s production of nuclear weapons is also related to its military budget, which had become so desperate “that people in the military didn’t get their salary.” He said budget constraints have prevented them from building up their military, so instead “they have focused on building up their nuclear forces.”

With the Chinese regime, they assessed that U.S. or Russian strikes, even without the use of nuclear weapons, could easily destroy any known nuclear facilities. Kristensen said, “they believe their silos were so vulnerable to disarming strikes that they started looking at underground sites and mobile sites.”

According to Fisher, however, the largest concern isn’t so much about numbers. The concern is about political openness and whether the United States is adapting its defenses to the current developments now taking place in Russia and China.

“As Russia and China walk down the road toward military coordination or an alliance for military cooperation,” he said, “the burden for maintaining the challenge of a sufficient capability for assured retaliation on the part of the United States increases greatly.”