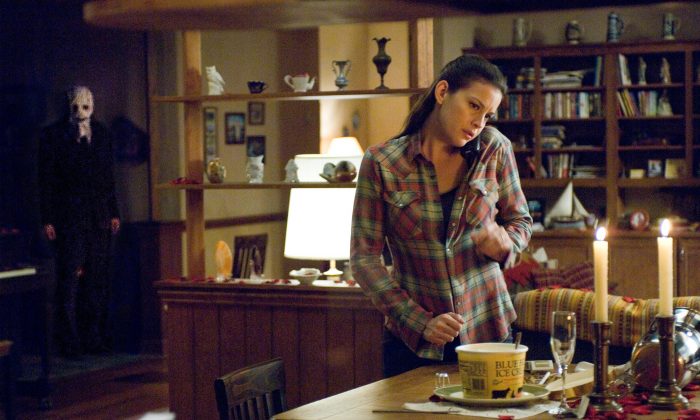 Scared? You will be, as Liv Tyler ‘really steps up her game’, and new director Bryan Bertino delivers an ‘overbearing sense of dread’ (Glenn Watson)
Entertainment

Once the off-putting, ridiculously gravely-voiced opening narration is out of the way (“What you are about to see is inspired by true events” blah blah blah), The Strangers proves itself to be a genuinely scary horror/thriller that could quite easily happen to you in your home tonight. Scared yet?

An appropriate alternative title for The Strangers would be Random Acts of Violence, for that’s the pivot that the film’s plot revolves around. Returning to their remote (of course) holiday home after attending a friend’s wedding reception, Kristen (the normally only-average Liv Tyler, really stepping up her game here) and James (Scott Speedman – great name, growing-in-stature actor) are in the midst of a relationship crisis. But on this fateful night their quarrel will turn out to be the least of their worries, for soon after 4am a trio of masked strangers invade their abode with mental and physical torture in mind. Simply “because you were home”.

A film all about tension and keeping you on the edge of your seat, The Strangers is somewhat slow-paced and actually contains very little in the way of action or violence (those that like their torture porn, move along). What it does have though is a spot-on sense of exactly how to build up suspense and then perfectly pay it off thanks to the considerable skills of new writer/director Bryan Bertino.
Setting an eerie, anticipatory tone in the early scenes, Bertino then slooowly adds layer upon layer of creepy suspense as you wait for the inevitable nasty to happen. Crafting a perfect symbiosis between image and sound, Bertino combines static, near-silent, lingering shots with simple but effective shocks to get right under your skin: a sudden knock at the door here, the heavy breathing of an attacker off-screen there, plus one of the creepiest soundtracks compiled for many a while (by tomandandy).

Relentlessly building its overbearing sense of terror and dread to almost unbearable point as the incessant and extended attack carries on through the night, you find yourself almost wishing your heroes dead and done with, just so the ordeal is finally over and you can heave a cathartic sigh of relief. Not that the cold-blooded, mask wearing, current-day droogs at the centre of the senseless attack will let you have it so easy.

Inviting inevitable comparisons to other house invasion films, The Strangers ultimately proves itself to be superior thanks to a reigned-in ending (unlike French flicks Haute Tension and Ils) and an aversion to preaching (unlike Funny Games US) about on-screen violence (although you could claim that it shares many of the ideas about complicity and desensitisation as Haneke’s flawed flick). Instead Strangers just worries about scaring the hell out of you for 85 minutes straight – which it achieves from gripping opening to knife-in-the-gut ending.