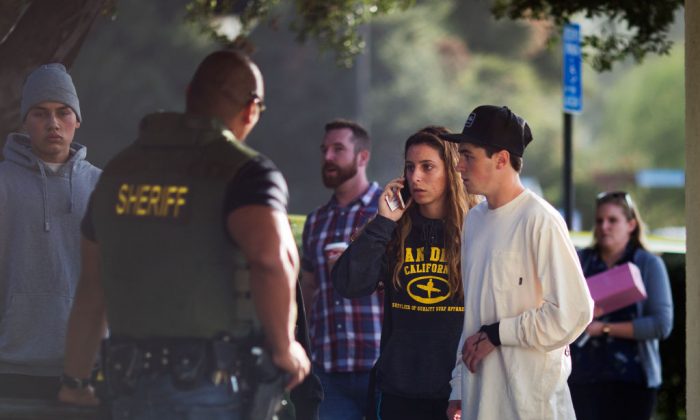 People arrive to a family assistance and reunification center following a mass shooting at the Borderline Bar and Grill in Thousand Oaks, California, on Nov. 8, 2018. (Photo by David McNew/Getty Images)
Crime and Incidents

Strangers leaped into action to save the lives of those they didn’t know during the mass shooting at a bar in Thousand Oaks, California on Nov. 7.

The shooting at the Borderline Bar and Grill during “Country College” night left 13 dead and more than a dozen others wounded.

The suspect was killed and later identified as Ian David Long.

Stories of strangers helping others survive began to emerge on Thursday, including women who recounted being pulled down, thrown under tables, and through windows, getting them out of the line of fire.

“Then these incredible humans just jumped up and started smashing out the windows and everybody was just like, jump, because we were trapped,” one woman wrapped in a dark blanket told reporters. “We were completely trapped on that side, so we jumped two stories to the ground.”

One woman in tears said her friends got bar stools to smash the windows so they could escape as gunfire erupted in the Borderline Bar & Grill in Thousand Oaks https://t.co/3gvXBtsEIT pic.twitter.com/vx25QXdUDa

Another woman said that a stranger grabbed her in a bear hug and dragged her out of the bar.

Cole Knapp, a freshman at Moorpark College, said when he realized the shooting was real, he started to help others.

“I tried to get as many people to cover as I could,” Knapp told the Associated Press. “There was an exit right next to me, so I went through that. That exit leads to a patio where people smoke. People out there didn’t really know what was going on. There’s a fence right there so I said, ‘Everyone get over the fence as quickly as you can,’ and I followed them over.”

Matt Wennerstrom said that he immediately recognized the sound of gunfire and smashed a window with a barstool to help rescue people.

“We probably pushed 30 or 35 people through that window,” Wennerstrom told ABC. “All I did was grab as many people as I could and pull them underneath the table until I heard a break in the shots, and then we got people out of there, as much as we could.

With blood still on the sleeve of his shirt, Matt Wennerstrom describes the mass shooting at the Borderline Bar & Grill. He says he threw a chair through a window allowing others to escape. @ABC7 pic.twitter.com/AnvYlSulhW

Ventura County Sheriff Sgt. Ron Helus, who was identified as one of the victims, rushed into the bar when he heard gunshots.

Sergeant Helus “immediately made entry into the bar and confronted the shooter but was shot and severely wounded. Civilians and other deputies pulled Sergeant Helus from the bar,” the Ventura County Sheriff’s Office said in a statement.

“Sergeant Helus was taken to a local hospital where he died from his wounds.”

“He gave his all, and tonight, as I told his wife, he died a hero,” Sheriff Geoff Dean told reporters, briefly choking back tears, at a press conference. “He went in to save lives, to save people.”

Helus, who was with the office for 29 years, was about one year away from retirement, the sheriff added.