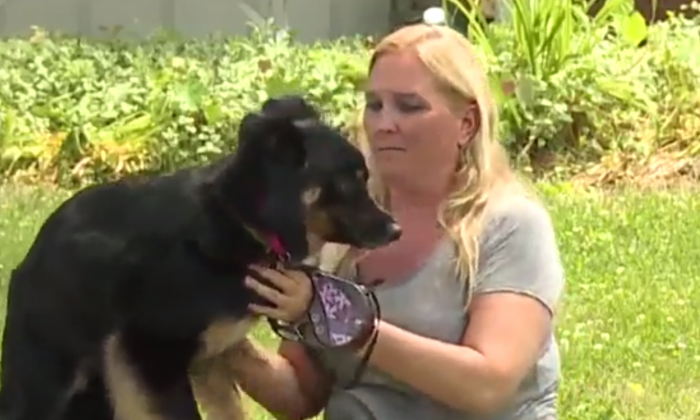 Strangers Feed Stray Dog for 2.5 Years Before Findings Its Owner

After three long years away, Ella was finally reunited with her family in Indianapolis on June 10, reported Tribune WXIN.

Ella is a skittish dog who ran away from her family in June of 2014.

The family looked in nearby woods and fields for her for several months with no luck. During the winter months, Theresa Hobson put food out hoping her dog would come home, but she never did.

Six miles away at a Butler Toyota in Indianapolis, workers at the dealership noticed a skittish stray that slept under a gazebo and disappeared into the woods whenever someone came too close.

“If you got close at all, within 50 feet, it took off and ran,” Mike McGinness, an employee at the dealership, told Tribune WXIN.

Not being able to capture the dog, he and other dealership employees left food out for it for two and a half years.

Then one day, they noticed that the dog was walking with a limp. They decided to try to capture it, and working with an organization called Friends of Indianapolis Dogs Outside (FIDO), they were able to lure it into a cage.

They brought it to the Humane Society of Hamilton County, and within 24 hours, the dog, whose microchip identified her as Ella, was reunited with her family.

“I’m so thankful for the people at Butler,” Hobson told  Tribune WXIN. “They took good care of her.”

Ella has an appointment to see the vet, but Hobson said she is in good shape for being outside so long, and may have even gained weight while she was away.