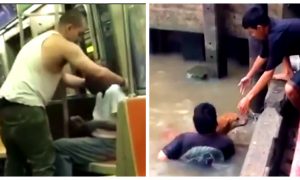 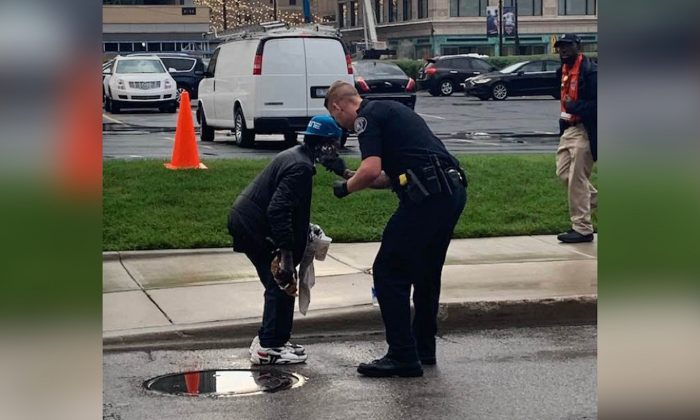 A police officer helps a man shave outside of Comerica Park in Detroit, Michigan, on Sept. 11, 2019. (Courtesy of Jill Metiva Schafer)
US News

A woman in Detroit, Michigan, captured the moment when a police officer stopped to help a man on the street shave in a humble act of service and kindness.

The incident occurred outside Comerica Park on Sept. 11 after the Detroit Tigers vs. New York Yankees game was postponed due to rain.

Jill Metiva Schafer was with her husband Andy just outside the park when she spotted the police officer helping a man on the side of the road to shave.

She captured two photos which she shared on Facebook.

“What a great Detroit cop!! This is right outside Comerica Park,” she wrote. “The game was a rainout but this officer went way above and beyond to help this man shave!”

Local station WXYZ was able to speak to the two individuals shown in the photo, who were identified as 62-year-old Stanley Nelson and officer Jeremy Thomas of the Detroit Police Department. The outlet reported that Thomas joined the DPD about three years ago.

The two men shared touching comments about how the situation unfolded.

Thomas told the ABC-affiliate that on the night, he saw a mother and daughter gift Nelson a homeless kit, which had a razor, some shaving cream, and a bottle of water inside. Moments later, a worker at Comerica Park notified him that Nelson was trying to use rainwater from a downpipe while trying to shave.

At the time, Nelson had shaving cream on his hands, coat, face, and eyes, and was also trying to rinse the razor in a puddle of water, Thomas recounted to the outlet.

“Excuse me, sir,” Thomas said while approaching Nelson, to which Nelson replied, “I’ll leave, I’ll leave.” But Thomas assured Nelson that he just wanted to help him shave, according to WXYZ.

“That was beautiful what he did, and God is gonna bless him for doing that for me because he didn’t have to do that,” Nelson later told the station.

“Humanity at its finest,” one person wrote.

“I saw this on this news. And wanted to send a message,” another person wrote. “Thank you, for capturing this photo of a Detroit Police officer doing a good deed. They get some much bad coverage and it’s not always warranted.”

The police officer shared some of his thoughts on helping others to the WXYZ, saying, “Just know that this could be you at any day. Nobody is better than the other person. They may be in a better position in life, but use that opportunity to take care of somebody else when you can.”