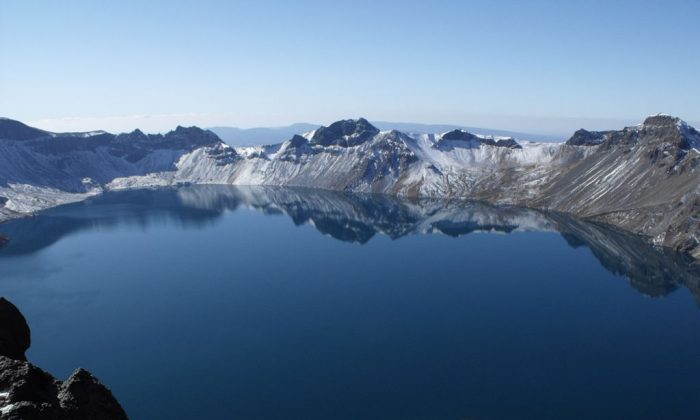 A scenic view of Tianchi Lake (Heaven's lake) in the Changbai Mountain in China’s northeastern Jilin Province in this file photo from 2010. Recently a Chinese worker sighted a strange creature in the large crater lake, describing it as vaguely resembling that of a deer. (Courtesy of Wang65/Wikimedia Commons)
Beyond Science

Workers at a volcano monitoring station near Tianchi Lake have recently reported sighting a strange creature in the large crater lake, located at the top of Changbai Mountain in China’s northeastern Jilin Province. The head of the creature is described as vaguely resembling that of a deer.

At 5 a.m. on July 27, Wu Chengzhi, a worker from the volcano monitoring station near the lake, travelled up the northern slope of Changbai Mountain with a colleague to take measurements of the lake’s water temperature and retrieve gas samples from the lake, reported Chengshi Wanbao, a Jilin-based newspaper.

The Tianchi Lake creature has been famous in the region since ancient times, with descriptions in ancient literature. The first reported sighting in recent times was in 1903. Some reports have been of sightings of multiple creatures.

Some have described the creature as having a dog-shaped body the size of a buffalo, with a duck beak. Yet others have said that the creature has a square head with a single horn on it, a long hairy neck, and dragon-like scales covering its body. Other reports have claimed that it looks like a long-necked horse with white fur.

News of the creature frequently attracts many curious sight-seers to the lake. The creature has been compared to the Hanasi Lake Monster in China’s northwest Xinjiang Province, as well as the infamous Loch Ness Monster in Scotland.

Tianchi Lake, also known as Heaven Lake, is the highest, largest, and coldest alpine lake in China, with an average year-round temperature of -7.3 degree Celsius (19 Fahrenheit). The surface of the lake is frozen solid for the most part of the year, but thaws in the summer when water temperatures rise to around 5 degree Celsius (41 Fahrenheit). It is difficult for aquatic life to survive at these temperatures, but scientists have recently found a small population of fish living in the lake.