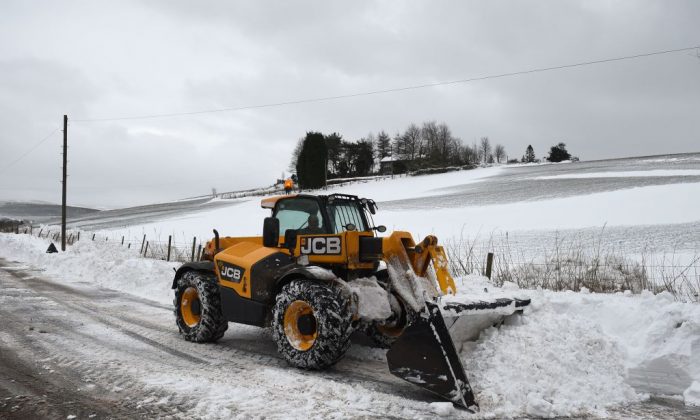 A JCB digger clears snow from the road between Delph and Denshaw in northern England on March 2, 2018. (Oli Scarff/AFP/Getty Images)
UK

As snow strangled the British transport system, motorists stranded on a highway for 12 hours got a little respite when a delivery driver shared the contents of his truck—full of pastries and donuts.

Traffic on one of the main roads between the north of England and Scotland, the A1, had stopped dead for 2 hours in heavy snow on March 1.

The delivery driver for Greggs, Britain’s largest baker, realized the biscuits and cakes in his lorry were going to go to waste.

Enlisting the help of another motorist, he began to distribute them to the scores of motorists on that section of the road near Berwick-upon-Tweed, Northumberland.

Les Goff, 39, from Leeds, one of those trapped on the road, told the Metro what happened.

“I was walking back down the hill when I saw the Greggs guy at the back with the tail-lift and he just said, ‘Do you want some cakes?'”

“He asked me to take some to the other drivers and he walked up the traffic and I walked down the traffic with doughnuts, vanilla slices, and cakes, handing them out.”

The driver,John Gowing, said he had phoned head office for the all clear when the idea struck him.

He told Heart radio station, “Whatever they wanted that was on the stack, it was all free.’

Round of applause required for the @GreggsOfficial delivery driver that sorted out free cakes for my mate and all the other poor buggers stuck in snow on the A1 today ??? pic.twitter.com/vwLYvyfTFH

According to the Metro, some motorists were stuck on the road for 12 hours.

The next day, however, and different Gregg’s truck was less lucky, skidding off an icy road in the Cotswolds, in the south west of England.

Britain has been in the grip of an unseasonable cold snap for several days as a weather system dubbed the ‘beast from the east’ brought cold winds and snow from Siberia.

@GreggsOfficial one of your lorry’s off the road in the Cotswolds. The driver is ok and I suppose has plenty of food to keep him going before he gets rescued ?? pic.twitter.com/g6BcETg6ZW

Britain’s infrastructure often struggles to cope with snow and schools and services are often criticised for closing pre-emptively in anticipation of transport chaos.

Some winters Britain gets almost no snow, however, successive governments and local councils have been unwilling to make the massive infrastructure investments that would enable the country to continue unaffected in rarer extreme weather.

Roisin Currie, people and retail director at Greggs told Birmingham Mail: “We are incredibly proud of Jon and his act of kindness in what must have been a very tough situation for him and all the other poor people stuck on the A1 in this cold weather.

“We hope that his kind gesture was able to help make everyone’s day a little bit better.