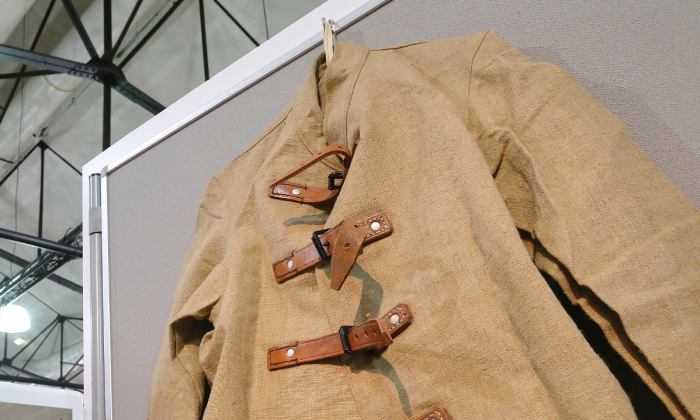 Straitjackets, a invention from over 200 years ago that was intended to prevent a mentally unstable person from harming themselves and others, are being used in Chinese prisons as sadistic torture devices.

These jackets should cause no harm to the person being restrained when used as intended. The arms are wrapped around the front of the body and strapped down within long canvas sleeves.

However, in women’s detention facilities in mainland China, the straitjacket is used by the Chinese Communist Party’s (CCP) to torture prisoners of conscience, according to a report by Minghui.org, a U.S.-based website that serves as a clearinghouse on the persecution of Falun Gong in China.

Prisoners will have their arms immobilized behind their backs, and be hung off the ground with ropes, according to the report. The ropes suspending the women are tied around the arms and wrists, which can cause severe physical damage.

“With these ties the arms of the victim are crossed and bound behind the back and then pulled forcefully over the head to the chest,” according to the International Society for Human Rights, a non-governmental organization based in Germany. “With this violent upwards wrenching of the arms, the shoulder joints are dislocated and the elbows and wrists are broken. In some cases, victims have subsequently been hung up upside down by both feet in indescribable pain.”

Falun Gong prisoners of conscience are particularly targeted with this form of torture, as guards are encouraged to employ a variety of torture methods to force adherents to renounce their faith, according to the Minghui.org report.

Falun Gong, also known as Falun Dafa, is a spiritual practice banned by the CCP in 1999, after its immense popularity resulted in up to 100 million adherents in China, according to estimates cited by Western media outlets.

The torture typically involves being hung off the ground in a straitjacket for entire days at a time, according to the report.

“The torture often resulted in injuries to the arms and sever swelling,” the report said.

While bound and suspended, prison guards would beat and shock the victim with electric batons, the report said. Even after being being taken down, the victims would be forced to stand or squat during the night, and thus go without sleep.

Victims are denied use of the restroom while suspended, the report added, and are further denied showering or any form of cleaning for long periods of time.

Below are examples from the report of straitjacket torture being used on women who practice Falun Gong.

Liu Saijun, was arrested on charges of distributing brochures about Falun Gong in July 2016. She was sentenced to two years in prison. No legal documents were provided about her sentencing, and her family was not even informed.

Inside the prison, guards forced Liu into a straitjacket and hung her from a hallway window frame from 8 a.m. until 11 p.m. The guards purposely put her out of view of a surveillance camera. She was wrapped in a blanket, and a cabinet was placed in front of her, all to conceal the torture.

Liu was denied use of the restroom, and eventually soiled herself. She was forbidden from washing or even changing her clothes. As a result, breathing became difficult.

When the guards finally took Liu down, she was forced to either stand or squat for the entire winter night. Due to her blood circulation being cut off, her whole body became swollen.

The exact same torture was then repeated the next day, many times over.

In August 2014, police broke into the house of Wen Shulin. They ransacked her residence, confiscated her computer, and took all literature related to her faith.

A year later, Wen was arrested for having brochures that were found from the initial ransacking, and sentenced to three-and-a-half-years in prison.

Wen suffered in a similar way to Liu while in prison. She was forced into a straitjacket and hung from morning until midnight. She lost mobility in her hands because the ropes that hung her were tied around her wrists. She could barely maintain consciousness and fell into a daze from the excruciating pain.

The guards would also get other inmates to monitor Wen. While suspended, an inmate would feed her only her tiny bits of food. She was also denied bathroom rights, and soiled herself as a result. Wen was even mocked by guards and prisoners, saying she had no shame.

When Jin Fuwan was imprisoned she was forced to wear a straitjacket four times. Three of those time, she was hung from a window frame so her feet could not touch the ground. Several fingers on her right-hand lost function from the enormous strain.

Jin protested the treatment by going on a hunger strike. As a result, she was not only force-fed, but also shocked with electric batons. The batons were inserted into her nose to shock her, and scars were left on her body afterwards.

Jin, just as the others, was forbidden from using the bathroom, and from cleaning herself.

After Jin was finally released, she appeared emaciated. Though only in her forties, her hair was already gray from the abuse.