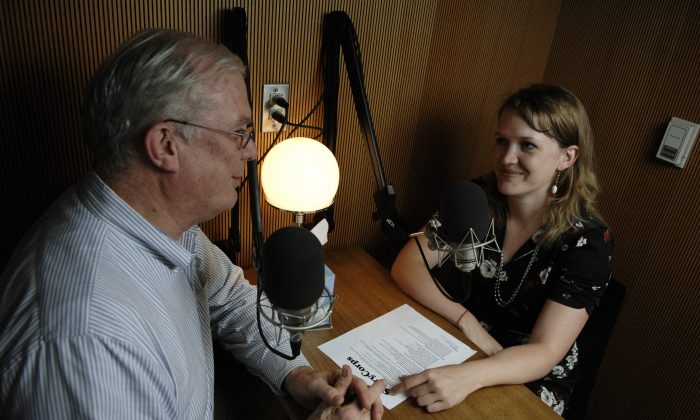 A youth interviews an elder in a StoryBooth. (Tony Rinaldo)
New York

StoryCorps Makes History One Interview at a Time

NEW YORK—Garrett Collins sat across from his 83-year-old grandmother, Esther Arrington, staring into her glossy charcoal brown eyes and her face unmarred by old age. He listened attentively to her recalling her experiences as one of the first female African-American investigators in the New York Medical Examiner’s Office.

Like Collins, tens of thousands of young Americans picked up their cellphones and interviewed a senior citizen for The Great Thanksgiving Listen over the holiday weekend.

This nonprofit oral history project by StoryCorps asked schoolchildren from around the United States to interview a grandparent or an elder in an unprecedented effort to double the number of interviews the project has collected since 2003 within the week, using its new mobile app.

Together we will collect the wisdom of a generation and archive it for the future.
— David Isay, president, StoryCorps

Colleen Ross, director of marketing and communication for StoryCorps, said they feel The Great Thanksgiving Listen was a great success.

“It was embraced so thoroughly that StoryCorps plans to make it an annual effort,” Ross said via email.

Through listening to his grandmother reminisce about her life and professional career, Collins, 17, was transported back into time to the Great Depression. He traveled to prestigious hospitals in her memories where she worked as a physician’s assistant, and he experienced through her eyes what it was like being a guard for President George W. Bush when he visited Ground Zero on Sept. 14, 2001.

The 12th grader from Berkeley Carroll School in Brooklyn was impressed with his grandmother’s perseverance to break away from the stereotypes for a woman of color.

“At the Medical Examiner’s Office, they gave her a driver and a company car. The driver was often a man. They would pull up to the crime scene. [The officers] would always look at the driver and look at her, and be a little confused. … She would have to get out and explain to them that she was the medical examiner,” Collins explained.

In a voice brimming with pride, he shared that his grandmother earned one of the highest-paid salaries in the city’s overtime list working in medical investigations between the early 1990s and early 2000s.

To see such a powerful black woman related to me, how she was able to overcome so much adversity … that’s very inspiring.
— Garrett Collins

“I felt like I was learning a lot of someone that I thought I knew. I probably knew my grandmother, but didn’t know her to that extent,” he said.

StoryCorps President Dave Isay said that he hopes the project will prove a unifying moment for the nation.

“Together we will collect the wisdom of a generation and archive it for the future while at the same time reminding our grandparents how much their lives and stories matter,” Isay said in a statement in August.

As the winner of the 2015 TED prize, his wish to grow his digital archive was fulfilled when StoryCorps developed a mobile app so that anyone can record an interview with a person anywhere and at any time. Isay said the app could be used across the United States and around the world.

How the Great Idea Started

While working as a radio producer, Isay was fascinated by how the simple act of being interviewed by someone had an enormous impact on someone’s life. While he was working on radio documentaries, he would encounter people who appreciated the opportunity to have someone listen to their stories.

He was eventually spurred to do something meaningful with his fascination. StoryCorps was thus born, beginning as a booth at New York Grand Station in October 2003.

At the booth, participants could have an intimate conversation with another person, usually an acquaintance or a loved one, while being recorded. In most cases, one person interviews the other about who they are, what they’ve learned in life, and how they want to be remembered. These words of wisdom were then archived at the American Folklife Center at the Library of Congress to share with the world.

Isay thought his idea would give countless people a chance to be listened to and would be a chance to pass on wisdom from generation to generation. It is now StoryCorps’s mission to provide people of all beliefs and backgrounds the opportunity to record, share, and preserve their stories.

“I had no idea if it would work, but from the very beginning, it did,” Isay said during his TED talk. “Many people think of it as, ‘If this was to be our last conversation, what would I want to ask of and say to this person who means so much to me?'”

Before the Thanksgiving project started, StoryCorps had already gathered over 65,000 recordings from over 100,000 participants—the largest single collection of human voices ever recorded.

Some of the most well-known participants include Humans of New York founder Brandon Stanton, former CEO of Twitter Dick Costolo, co-founder and current CEO of Twitter Jack Dorsey, and President Barack Obama.

Collins said he repeatedly listens to his grandmother’s interview recording. He added that his grandmother taught him to take advantage of every opportunity that presents itself to him.

“To see such a powerful black woman related to me, how she was able to overcome so much adversity and to see her change at every stage of her life—that’s very inspiring,” Collins said.

Collins thinks it is important to preserve the voices of Americans because it captures how people feel at any moment in time.

“We kind of have an idea of what people felt like 100 years ago, but having a collection of voices and stories that we can go back and listen to forever really lets us empathize with those in the past and understand what they were going through and how they were feeling—their fears, their accomplishments, and their successes,” Collins said.

“I like the connectivity that it allows us to have with the past. It makes the past come to life almost,” he added.

Starting on Nov. 23, the project has allowed thousands of young Americans to work together with their teachers to record meaningful conversations and create a worthwhile educational experience. These recordings can be heard on the StoryCorps website. The Thanksgiving project runs until Dec. 4.

“When your coupons ran out, you couldn’t buy any more food until you got more coupons,” Myers said during the interview on Nov. 29. “That affected our lives.”

She also talked about the blackouts every night. “It was pitch dark. We always had to keep our shades drawn at night,” Myers said.

Nicholas Chen’s father was originally from Shanghai. He migrated to America when he was 20 in order to seek a better life. Now at the age 54, Frank Chen, recalled in his interview on Nov. 30 that the person who inspired him most was his physics teacher.

“She [taught] me a lot academically—and how to be a good person,” Frank said.

Nicholas, 13, discovered that his father dreamed of becoming a pilot as a child; however, he was unable to fulfill his dreams because of government restrictions.

“During the Cultural Revolution, I guess we were little. After we grew up, we have to hold [the] red book with Mao’s words in it,” Frank said. “That’s how they brainwashed you.”

A Heartfelt Conversation With Grandmother

When Ruthie Doneen interviewed her grandmother, Penny White, on Nov. 27, Doneen learned that her grandmother’s proudest job was being a disaster-relief nurse.

“Going to places all over the world after natural or manmade disasters and trying to make a difference in the lives of other people that are affected by it … that has probably been my greatest reward professionally,” White said.

During the interview, Doneen was reminded of the importance of family traditions because everything that’s important in life is celebrated with family.

“I am hoping that that tradition will continue once I’m gone,” White said.