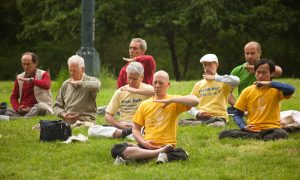 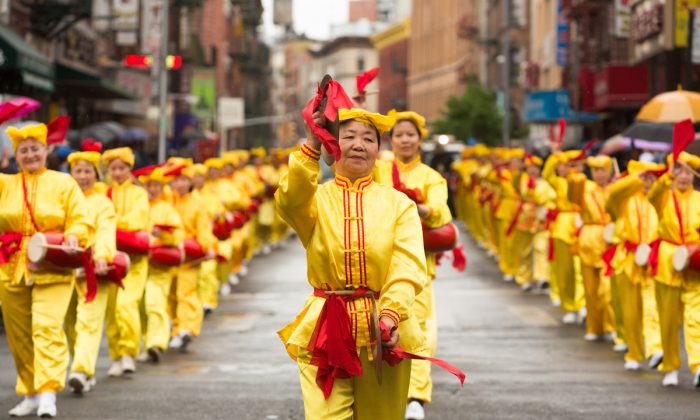 Spectators learn about beauty of Falun Dafa, as well as persecution of the practice in China
By Shar Adams

NEW YORK—Falun Dafa practitioner Yi Fan did not want to move to America when she left China two-and-a-half years ago because she wished to let more Chinese people know that Falun Dafa is good. Falun Dafa is a self-cultivation practice involving gentle exercise, meditation, and a teaching of truthfulness, compassion and tolerance.

Fan was living under constant threat of arbitrary arrest and torture. She was imprisoned for many years and tortured for telling the truth about Falun Gong, but she said she would have never renounced her belief in the practice or disavowed its principles.

“A lot of people in China are fooled by the CCP [Chinese Communist Party], by their lies,” she said through a translator. Fan, nearly 60 years old, finally surrendered to her daughter’s pleas to leave the mainland and move to the United States, and she immediately discovered the joy of freely practicing Falun Dafa again.

On Saturday, May 18, Fan was part of an annual Falun Dafa parade, surrounded by hundreds of brightly colored banners, and standing in line with nearly 8,000 other practitioners from all over the world.

After seeing the parade Ms. Zeng, a spectator, said the Chinese government cannot suppress Falun Gong. More and more people are participating and Falun Gong is well respected, she said.

It is on account of the persecution that Fan suffered, and the communist party’s hurtful propaganda which so contradicts their positive experience of Falun Dafa, that practitioners assemble in Manhattan for a weekend of events every year. Practitioners say they want to clarify to the public what Falun Dafa is, and tell people about the persecution in China.

Birgitta Karlsson came from Sweden to participate in the parade. After practicing for 11 years she said Falun Dafa had changed her life.

“I have been sick for many years, and I am so fine now,” she said.

Reema Dossa, from St. Petersburg in Russia, was among 20 other Russians in the parade. She has also been practicing Falun Gong for 11 years, and noted that a parade would not be possible in Russia. Soviet authorities repress Falun Gong to appease the CCP, she said.

“In this country freedom is good,” she added, struggling to express in English her enthusiasm for the Manhattan parade.

“Falun Dafa taught me to be a caring person and how to behave according to truthfulness, compassion and forbearance,” said Elsa Chen, 28, also from Australia.

The parade was filled with exciting, as well as solemn sections representative of the story of Falun Dafa’s journey since its introduction in 1992. It included a marching band, traditional Chinese waist drummers, dancing heavenly beauties, floats, simulations of torture practitioners have suffered in China, memorials for practitioners who lost their lives due to the persecution, and people raising awareness of a movement in China where 138 million Chinese have withdrawn from the CCP and its affiliated organizations.

Bystander Nathan Jarvis, a retail manager visiting New York from Wilmington, North Carolina, said he was surprised at the size and scope of the parade, and the number of countries represented.

“The impressive thing about this is how many people they have in this parade protesting in support of the rights of people in China that are being oppressed.”

Bystander Giulia Baettig, 18, from Switzerland, said she was grateful that the parade had enabled her to find out about Falun Dafa and the persecution in China.

“It is really shocking they are being killed,” she said. “I would have never found out if they had not [had a parade].”

Zeng added “people are getting to know the truth about Falun Gong.”