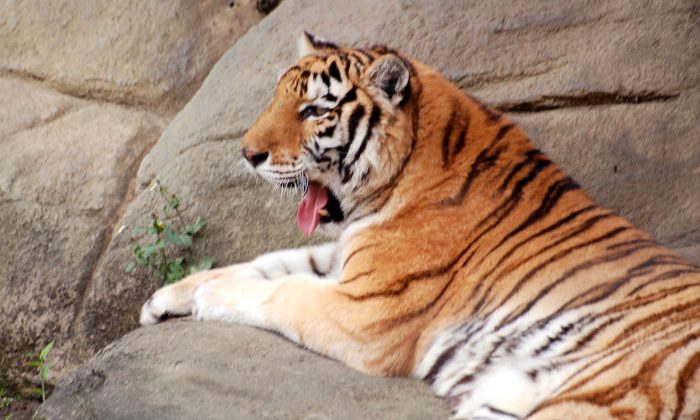 Renowned painter Gu Kaizhi (顧愷之) of the Eastern Jin Dynasty (A.D. 317–420), who is esteemed as the father of traditional Chinese painting, had the nickname “Hu tou” (虎頭), or “tiger head.”

The reason he was known as “tiger head,” meaning the “leader of tigers,” has to do with one of Gu’s most famous paintings, “Luo Shen Tu” (洛神圖), literally “picture of the Luo god.” “Luo Shen” refers to the goddess of the Luo River.

The painting, titled “Nymph of the Luo River” in English, is based on a poem of the same name by Cao Zhi (曹植) (A.D. 192–232), prompted by the poet’s love for a beautiful lady who died and who he believed later appeared to him as a goddess rising from the Luo River.

To complete his masterpiece, Gu Kaizhi went to the lakeshore to paint every day, wishing to gain inspiration from the lovely natural setting.  It was an area frequented by tigers.

One evening, Gu was preparing to go home when wavelets suddenly rippled on the lake surface and a beautiful maiden appeared, smiling as she stood on the water. After a moment, she turned away and vanished.

Gu quickly took out his scroll and brush in order to capture the scene. But before long, the hairs on his brush began to shed. He happened to put his hand down and felt something soft and furry. He grasped a handful and saw that it was fine hair in a golden-yellow colour.

Delighted, Gu pulled some thread from his clothing and used it to tie the hair together to make a brush so that he could continue painting.

The next day, at the same location, he found a large yellow rock that was not there the day before. The rock looked like a tiger lying on the ground. Gu wanted to find a place to sit and paint, so he very naturally sat on the rock.

From then on, until Gu finished his painting, every day a new large yellow rock would appear by the lake. Gradually, the lakeshore was filled with yellow rocks shaped like tigers. Strangely, the tigers in that area gradually stopped appearing.

Passersby always reported seeing several tigers calmly lying next to Gu Kaizhi, attentively watching him paint. And every night, the ground would be covered by golden-yellow tiger hair.

This story of mystery and wonder spread far and wide, and everyone believed that Gu Kaizhi must be the head of all the tigers. This is how Gu Kaizhi came to acquire the nickname “tiger head.”