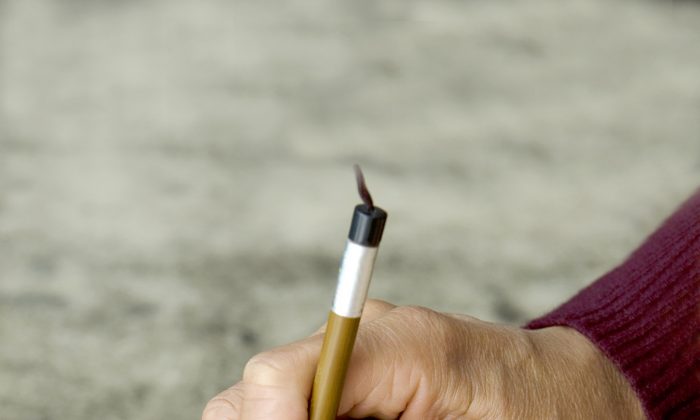 A father teaches a child Chinese calligraphy, an art form that has developed over many centuries, encompassing aesthetic dimensions such as rhythm, design, neatness, and beauty. (Fergus Wang/Fotolia)
China

Renowned calligrapher Wang Xizhi (王羲之), known as the Sage of Calligraphy in China, lived during the Jin Dynasty (A.D. 265–420) and had seven children, among whom his youngest son, Wang Xianzhi (王獻之), was also a distinguished calligrapher.

By the time Xianzhi was 15 years old, he had already achieved great skill in calligraphy and often received praise from his father and other elders.

Xianzhi became quite arrogant and lazy, thinking that his ability was already excellent and he no longer needed to work hard and make effort to improve.

There is a story about how Wang Xizhi helped his son realize the foolishness of arrogance and the importance of diligence in order to achieve his ambition.

One day, Wang Xizhi was summoned to the capital and his family held a farewell dinner for him that included fine food and wine. While slightly intoxicated, Wang Xizhi had a sudden inspiration to write some words of wisdom as guidance for Xianzhi.

Wang Xizhi wrote a poem on the wall called “Precepts Against Arrogance” (戒驕詩), advising Xianzhi not to be arrogant but to work hard.

Xianzhi, however, was not convinced in his heart. Instead, he copied the poem dozens of times each day, and just before his father returned home, he erased the poem when no one was looking and rewrote it in the same location on the wall, imitating his father’s calligraphy.

Xianzhi was very proud of himself. In his arrogance, he thought his calligraphy was just as good as his father’s and that no one would be able to tell the difference.

When Wang Xizhi came home, he looked intently at the poem on the wall for a long time, then scratched his head and sighed.

“Alas! Could I have drunk too much wine that night, to have written such clumsy characters?” Wang Xizhi exclaimed.

His son instantly blushed, feeling deeply uneasy and ashamed. Wang Xianzhi finally realized that only through diligent study and hard work could he eventually become a renowned calligrapher.

Writing down words of traditional wisdom for one’s children was a form of moral education practiced by ancient Chinese families.

There are a number of well-known writings of this kind, called “Jie Zi Shu” (戒子書), or “Precepts for a Son,” penned by notable Chinese historical figures.

The most famous piece is a letter by Zhuge Liang (諸葛亮) to his 7-year-old son Zhuge Qiao.

In his letter, Zhuge Liang taught his son that in order to realize high ideals and avoid sad regrets later in life, he must keep a tranquil mind, take worldly fame and fortune lightly, and study diligently while guarding against frivolity, laziness, and a hot temper.