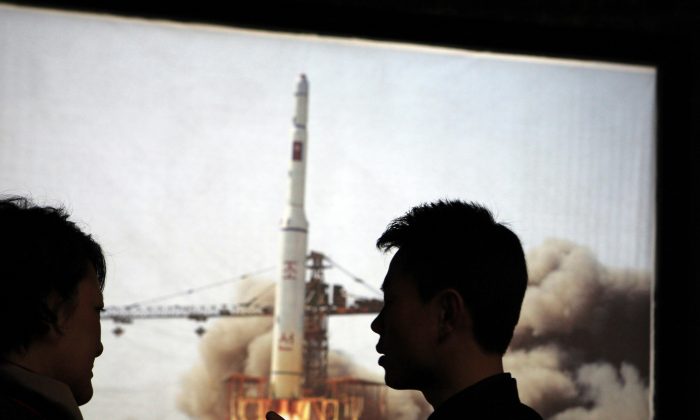 A 2009 satellite rocket launch is displayed at the Three Revolutions Exhibition Hall in Pyongyang, North Korea, on April 10, 2012. The Unha 3 rocket that launched the “Bright Star” satellite into space in 2012 is a symbol of North Korea’s technological successes and a matter of great national pride. The country plans another launch to put Earth observation satellite into orbit in February 2016. Although the equipment it will use is not yet known, the launch could also advance its military-use missile technology further. (AP Photo/Ng Han Guan)
Asia & Pacific

Storms May Brew, but in North Korea Pride Over New Satellite

PYONGYANG, North Korea—Hours after the rest of the world already knew, North Korea’s state media triumphantly announced in a special news bulletin to the nation Sunday it had successfully launched a satellite into orbit, calling it a major milestone in the nation’s history and the “greatest gift of loyalty” to the country’s young leader, Kim Jong Un.

In a possible hint of what might lie ahead, however, North Korea’s state media implored the nation on the eve of the launch to be prepared for whatever “violent storm” may be coming.

They may need to: the U.S., South Korea and Japan have strongly condemned the launch, and potential new sanctions over both the launch and the North’s purported hydrogen bomb test just one month ago are now being discussed in the U.N. Security Council.

North Korea’s most famous and venerated TV newscaster, dressed in a traditional pink gown, proudly announced on the TV bulletin—reserved for extremely important events—that the Earth observation satellite Kwangmyongsong-4 had been successfully put into orbit early Sunday morning. She called it an “epochal” moment.

The news Sunday was the first acknowledgment of the rocket preparations made to the North Korean public, even though the launch plan had been released in advance to international organizations to avoid accidents with commercial shipping or aircraft and had been closely watched by experts around the world for more than a week.

As the news aired, crowds in Pyongyang cheered and applauded as they watched the news of the launch, which was displayed on large screens at different places around the capital.

“As far as I know, there are few countries in the world that launched their own satellites,” said one, Pyongyang resident Ri Hyon Gil. He added that he was proud of both the launch and the news of the H-bomb test because they demonstrate the North’s scientific and technological progress.

North Korea claims to have successfully put four satellites into orbit. Foreign observers have confirmed only two—this one and a similar probe launched in 2012. They also question whether the 2012 probe ever transmitted any signals back to Earth, though the North claims it broadcast patriotic odes to the nation’s leaders.

It may take several days to confirm whether Sunday’s satellite is alive and transmitting signals to the ground.

North Korea’s official news agency, KCNA, called the launch a “complete success” and said it marked a major advance in “developing the country’s science, technology, economy and defense capability by legitimately exercising the right to use space for independent and peaceful purposes.”

The inclusion of “defense” in that statement could be problematic in the weeks ahead.

It had also been careful not to trumpet this launch until after the satellite was confirmed in orbit.

But in another report just before the launch, which like the “violent storms” report made no direct mention of the rocket or the international condemnation it has received, noted that Monday is the anniversary of the founding of the Korean People’s Army in 1948.

That, along with the birthday of former leader Kim Jong Il on Feb. 16, a major holiday called the Day of the Shining Star in North Korea, are likely why the North planned the launch at this time.

As KCNA put it:

“The fascinating vapor … trailing in the clear and blue sky in spring of February on the threshold of the Day of the Shining Star, the greatest national holiday of Kim Il Sung’s Korea, is a gift of most intense loyalty presented by our space scientists and technicians to the great Comrade Kim Jong Un, our dignified party, state and people.”