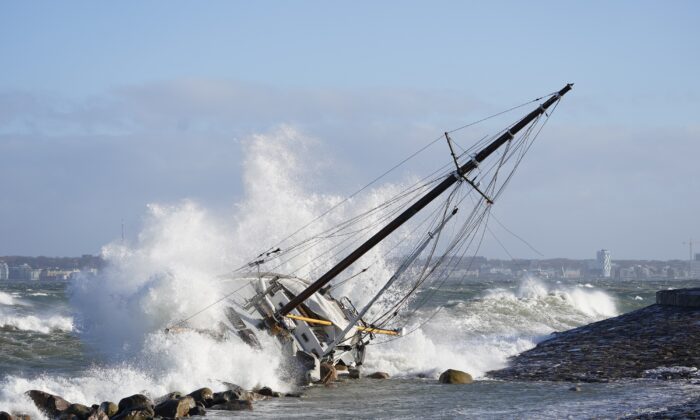 Waves crash against a sailboat in Elsinore, Denmark, on Jan. 30, 2022. (Keld Navntoft/Ritzau Scanpix via AP)
World

Storm Malik was advancing in the Nordic region on Sunday, bringing strong gusts of wind, and extensive rain and snowfall in Denmark, Finland, Norway, and Sweden.

Malik reached the Nordic region and northern Germany late Saturday after moving in from Britain where it caused havoc with material damage and transport chaos, hitting Scotland particularly bad.

In the UK, a 9-year-old boy in Staffordshire, England, and a 60-year-old woman in Scotland were killed Saturday by falling trees as strong winds battered northern parts of Britain.

Wind gusts of more than 100 mph (160 kph) have been reported in parts of Scotland, causing widespread disruption to transport and leaving tens of thousands of homes without power.

Scottish leader Nicola Sturgeon said that while scores have had power reconnected, power disruptions will continue for many because another storm is due to hit the region on Sunday.

In Denmark, strong winds with heavy rain caused the temporary closure of several bridges on Saturday including the key Oeresund road and rail bridge connecting Copenhagen and the Swedish city of Malmo.

Southern parts of Sweden were badly hit, too, and thousands of households were without electricity by Sunday afternoon. Ferries to the Baltic Sea island of Gotland were canceled because of strong winds.

Severe damage to houses, cars and boats, among other things, were reported in Norway while heavy snowfall throughout Finland caused road crashes and disrupted bus and train traffic in parts of the country.