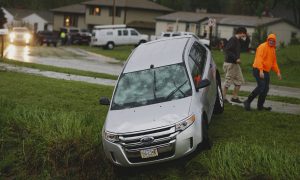 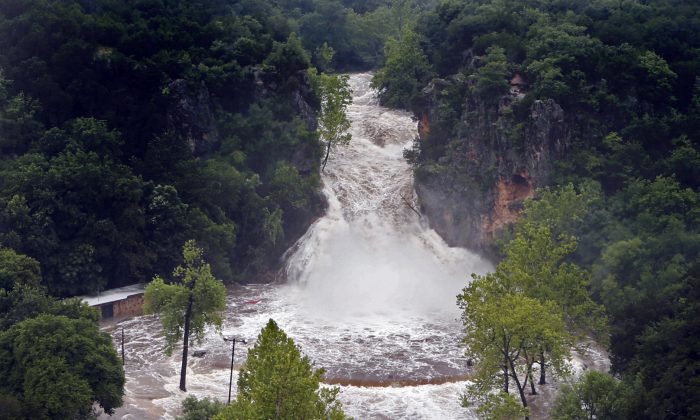 Water pours over Turner Falls and floods the park below in Davis, Okla., on Thursday. (Steve Sisney/The Oklahoman via AP)
US

LITTLE ROCK, Ark.—A stormy weather system that once was Tropical Storm Bill prompted flood warnings across the Ozarks and mid-Mississippi Valley early Friday, even before rains began to fall there in earnest.

Since coming ashore Tuesday along the Texas Gulf Coast, the tropical system has claimed at least one life — that of a 2-year-old swept from his father’s arms as they tried to escape a raging Hickory Creek in Ardmore, Oklahoma. The region just north of the Texas border had 10 inches of rain Wednesday night and Thursday.

“The water was just flowing like a river down the streets,” Amber Wilson, the emergency manager in Ardmore, said after the overnight downpour. “It was so forceful that it washed away the barricades and pushed manhole covers out of the streets,” she said. Even giant trash bins gave way to the water.

Forecasters said the worst weather overnight would be in the heart of the Ozark Mountains along the Arkansas-Missouri border. Early Friday, the National Weather Service said 4 to 6 inches of rain had fallen in southern Missouri, flooding numerous roads but leading to no early reports of injuries or extraordinary damage.

The agency issued flash flood warnings for more than 20 counties in southwest and east-central Missouri.

“When water hits a mountain, and the kind of terrain in that area, it all goes to the same spot: down,” said Rick Fahr, a spokesman for the Arkansas Department of Emergency Management.

Missouri, Illinois and Indiana braced for high water through the weekend. Missouri Gov. Jay Nixon on Thursday declared a state of emergency after heavy rains earlier in the week and the threat of more from Bill.

“With more heavy rain in the forecast, we will continue to remain in direct contact with law enforcement and local officials as we work to protect lives and property,” Nixon said in a statement.

Bill’s remnants spurred at least one funnel cloud in Arkansas, on the stronger side of the storm, but there was no proof that it had touched down. Other strong storms raked the western half of the state in feeder bands extending from northeastern Oklahoma to near the Gulf Coast. Up to 5 inches of rain could fall.

“Those 3 to 5 inches are on top of all that rain they saw in May. Normally that wouldn’t cause the concerns we have. But they’re just so wet and the ground is already so saturated,” said meteorologist Joe Goudsward at the National Weather Service office in North Little Rock.

Oklahoma was hardest hit Thursday, when heavy rains swelled rivers and forced a rock slide that closed Interstate 35 for a time. Oklahoma City to Dallas traffic was diverted to Wichita Falls, Texas, adding 70 miles to the trip.

In Ardmore, near where I-35 crosses into Texas, authorities found Jeremiah Mayer’s body Thursday about 30 yards from where the boy was last seen after being swept out of his father’s arms. Police Capt. Eric Hamblin said Hickory Creek, which rose 12 to 15 feet in an hour, swamped the boy and his father as they tried to flee.

Further north, near Macomb, authorities on Thursday evening recovered the body of an 80-year-old woman from a car partially submerged in floodwaters, Pottawatomie County Undersheriff Travis Palmer told the Shawnee News-Star. Her official cause of death has not yet been determined.

In Carter County, Elvin Sweeten and a son cut fences at their 600-acre ranch so their horses and cattle could escape water spilled out of the Washita River’s banks. “We have a boat. If we have to get out, we can,” he said.

Kristen Greenwood, a supervisor at Original Fried Pies in Davis, had to take the old road to work after the rock slide and high water from a nearby lake cut off I-35.

“I had to turn around. I couldn’t drive on the whole 10-mile stretch,” she said. “I was lucky because my exit was just after the lake, so I could get on, but all the rivers are flooding over the bridges and the lake is overflowing.”

Gazing out the pie shop window, Greenwood estimated the water on the other side of the parking lot was several feet deep: “Probably waist-deep on me, but I’m short.”