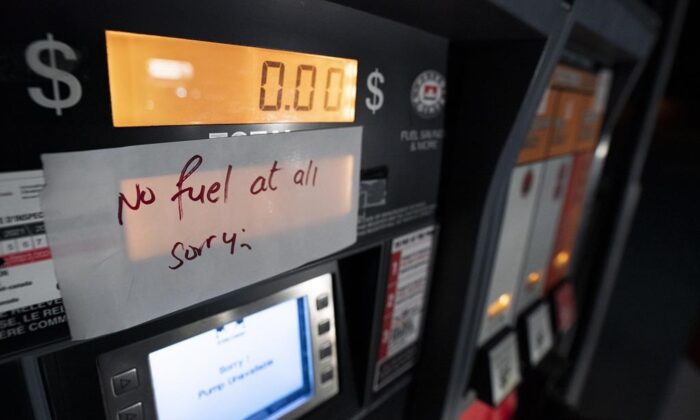 A gas pump with a sign noting no fuel available is pictured at a gas station in Agassiz, B.C., November 17, 2021. (The Canadian Press/Jonathan Hayward)
Canada

Storm Damage in BC Prompts Gasoline and Travel Restrictions

VICTORIA—British Columbia’s public safety minister says he’s relying on the good judgment of residents to ensure the province doesn’t run out of gasoline.

Mike Farnworth says B.C. residents, who are not essential workers, will be limited to buying 30 litres of fuel per gas station visit as the government looks to truck or barge gas in from as far away as California.

The rationing applies to B.C.’s Lower Mainland, the Sea-to-Sky region, Sunshine Coast, Vancouver Island and the Gulf Islands. It comes after supply lines, including major highways and rail, were washed out or flooded by record rainfall that started last weekend.

Farnworth says police will not be enforcing the provincial order, and that the government is relying on residents to “do the right thing” until the order lifts on Dec. 1.

Travel has also been restricted along Highways 3, 7 and 99 to ensure only essential traffic can get through.

Meanwhile, more rain is in the forecast as crews, including Armed Forces members, work to quickly fix a broken dike in the Fraser Valley that flooded one of B.C.’s prime farming areas.