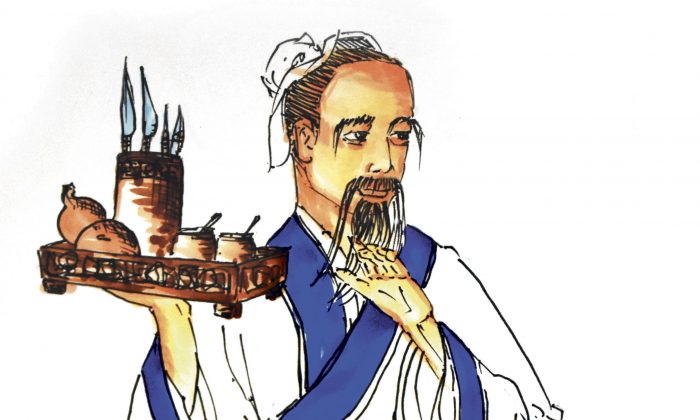 Hua Tuo was born in the late Eastern Han dynasty. He was a great physician who knew ways of preserving health. He had the looks of a young man despite his age and was regarded by the people at that time as a deity. His divine healing skills are recorded in “Records of the Three Kingdoms, Biography of Hua Tuo.”

The ruler Cao Cao was plagued by chronic headaches for many years. Knowing Hua Tuo was a divine physician, he often summoned Hua Tuo to his palace to treat him. Every time Hua Tuo administered acupuncture on him, the effect was instantaneous.

But Hua Tuo preferred a carefree life. He sought permission to return to his hometown on the pretext that his wife was sick. Cao Cao tried to summon him back to his palace several times to no avail. When he found out it was not true that Hua Tuo’s wife was sick, he had Hua Tuo thrown into prison.

Court officials interceded for Hua Tuo. They felt that Hua Tuo should be spared since he could save lives with his superb healing skills. But Cao Cao was not worried. He said, “Surely there are other physicians on a par with him?” Eventually, Hua Tuo died in prison.

Cao Cao continued to suffer from headaches after Hua Tuo’s death. When Cao Cao’s son Cao Chong became critically ill, Cao Cao lamented with regret: “If only I had not killed Hua Tuo. I have sealed the fate of my own son.”

An Expert in Acupuncture and Surgery

Hua Tuo was an expert in medicine. Only a few types of herbs were all it took, and when Hua Tuo prepared medicine, he did not even have to weigh the herbs.

When it came to acupuncture, he could heal patients by administering just one or two needles. Before he inserted a needle into the patient, he would say to him, “Let me know when you can feel the needle.” When the patient said he could, Hua Tuo would remove the needle, and the patient would instantly feel better.

It was Hua Tuo who discovered the Jiaji acupuncture points (Hua Tuo’s Paravertebral Points). They were later known as the Huatuojiaji Points.

Hua Tuo was also a great surgeon. If the focus of infection was in the body and neither acupuncture nor medicine worked, surgery would be necessary. Hua Tuo would give the patient a liquid form of anesthetic to drink. When the patient slipped into an unconscious state shortly afterward, Hua Tuo would open up his abdomen to remove the infected part, cleanse the area, and stitch the abdomen closed before applying a cream to the wound. In just four or five days, the pain would be gone, and the patient would gain full recovery in a month.

There was a patient who had a stomachache for over ten days. His eyebrows and beard were coming off. Hua Tuo diagnosed that half of the patient’s spleen was damaged and the patient had to be operated on. When the patient took the anesthetic solution and lay down, Hua Tuo opened up his stomach and found that half the spleen was indeed damaged. He removed the damaged part and the dead tissues and applied medicated cream to it. The patient took oral medicine after he came round and recovered in less than 100 days.

Hua Tuo often visited famous mountains. One day, he came to an old cave on Mt. Gong Yi and heard voices. Someone was discussing ways of treating diseases. He went closer to the cave out of curiosity and heard someone saying: “Hua Tuo is right here. Let us impart the healing skills to him.”

But another person disagreed. “Hua Tuo should not be imparted the skills, since he’s a greedy person with little compassion.”

Hua Tuo jumped into the cave and saw two old men in clothes made of tree bark and straw hats.

Hua Tuo went up to them and said: “I’m keen to learn the art of healing, but I’ve never met a good teacher. Please impart the skills to me because I’m sincere about learning them. I will not disappoint you.”

The old men said: “We will impart the healing skills to you, but it might be the cause of your downfall in the time to come. Do not discriminate against anybody on the grounds of their social status or wealth, be avaricious, or be daunted by hardship. Then you will not come to any harm.”

Hua Tuo thanked the old men and promised to bear their words in mind.

The old men smiled and pointed to a stone bed. “There’s a book on the bed. Take it and leave the cave at once. Do not show the book to anyone.”

Hua Tuo took the book and turned around, and the old men were gone. He hurried out of the cave, and as soon as he did that, the cave collapsed. The book from the cave contained strange prescriptions that worked wonders. Hua Tuo was killed by Cao Cao before he was 60. The words of the old men came true. (from “Zhong Cang Jing—Central Treasury Classic,” believed to be written by Hua Tuo)

Successor to the Yellow Emperor’s Art of Healing

Wang Bo, who was born in the early years of the Tang Dynasty, was famous for his literary work, the “Preface to the Pavilion of Prince Teng.” Cao Yuan, who lived in the city of Chang’an, was a good friend of Wang Bo’s. According to the “New Tang Book, the Biography of Wang Bo,” Wang Bo became friends with Cao Yuan and learned healing skills from him.

The art of healing dates back to Shangdi, the Heavenly Ruler, who passed it down to Xian Shi (Qi Bo’s teacher), Qi Bo, and the Yellow Emperor in chronological order. The Yellow Emperor then imparted the healing skills to Lei Gong and further on to the royalty of the Shang and Zhou dynasties.

The skills were eventually inherited by Bian Que 2,400 years ago during the Warring States period, and by Hua Tuo 1,800 years ago during the late Eastern Han Dynasty. Bian Que and Hua Tuo were revered and seen as divine physicians because they were true successors to the Yellow Emperor’s art of healing. They possessed the ability of clairvoyance and the skills to perform surgery.