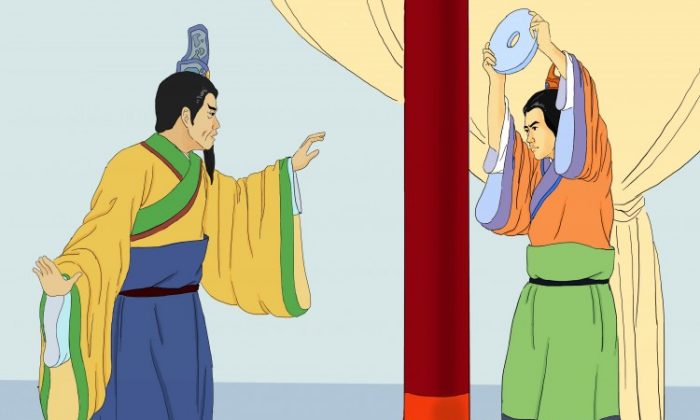 Stories from History: Returning the Whole Jade Without Damage

According to an old Chinese saying, if two tigers fight each other, one will be wounded or killed. Human beings also compete and fight with one another, but they are also capable of a wisdom that prevents conflict or brings about friendship. Such wisdom helped preserve the whole jade for the Kingdom of Zhao.

During the Spring and Autumn period of the Era of the Warring States, there was a general named Lian Bo who served the Kingdom of Zhao.

In the sixteenth year of the reign of King Zhao Huiwen Wang, Lian served as the general who led the attack on the Qi Guo Kingdom. Because Lian Bo defeated Qi and captured Yang Jin City, he was appointed to be the Shang Qing, which is one of the highest officials in the Zhao Kingdom. After that, Lian Bo became very well known among the warring kingdoms for his bravery and for always being victorious in battle.

At the time of Zhao Huiwen Wang, the Kingdom of Zhao acquired the He Shi Be jade, after it had been lost by the Chu Kingdom. This large piece of white jade in the shape of a disk would play an important role in Chinese history. Qin Wang, the king of the Qin Kingdom, heard about Zhao’s acquisition of the jade and sent a letter to Zhao Wang. He offered to exchange 15 cities in Qin for the He Shi Be.

While feeling unsure about what to do, Zhao Wang wanted to send someone to Qin to reply, but he could not find someone who could succeed at the job. The head eunuch Miao Xian said he had the right man for the job—Lin Xiangru would be very well qualified to do it. Lin Xiangru lived in Zhao Kingdom as a guest in the household of Miao Xian.

Zhao Wang asked, how did he know that Lin Xiangru could accomplish this?

Miao said, “Once I made a mistake and was afraid your majesty would punish me and would not forgive me. So I had planned to escape to the Yan Kingdom.

“Lin Xiangru then asked me how I knew Yan Wang would accept me and keep me there? I told him that before, I went with your majesty to a meeting with Yan Wang at the border. Privately, Yan Wang held my hand saying he would like to make me his close friend, so I knew Yan would accept me.

“Lin at hearing that shook his head and said, ‘at that time Yan was afraid of Zhao. Zhao was strong, and you were a close and trusted official of Zhao. That’s the reason Yan wanted to make friends with you. Now that you have offended Zhao, how would he dare keep you, since Yan fears Zhao?

“‘Instead, Yan would tie you up with rope and send you back to Zhao. I would rather strip my shoulders naked, carry a whip, kneel in front of Zhao, and beg his pardon, which is best way to be forgiven. I listened to him, and, fortunately, Dai Wang you forgave me.’

“I think Lin is a very wise man and extraordinarily brave. He is right for this task.”

So, Lin was summoned to visit Zhao, who put the matter to him, “Qin Wang wants to exchange 15 cities for the He Shi Be jade. What do you think?”

Lin replied, “Qin is big and powerful, Zhao is small and weak. We have to obey their request.”

Zhao said, “What if Qin took my jade but did not give us their cities?”

“If we don’t agree to give the jade to Qin while Qin asks us to exchange the jade for their 15 cities, then we are doing wrong,” Lin said. “But if Zhao gave the jade to Qin and Qin doesn’t give cities to Zhao as promised, then Qin is wrong. So weighing the situation, it is better to agree with Qin’s request and let Qin take the responsibility for doing wrong.”

Zhao then asked, “Who can I send to Qin for this?”

“I am willing to do it if Dai Wang, your majesty, has no person to do it,” Lin said.

Zhao then sent Lin to Qin with the He Shi Be.

Lin, holding the jade with his hands, presented it to Qin. Qin was very happy, and passed the jade out to his concubines and attendants. All the ministers cheered: “Wan Sui”(long life)!

Lin read Qin’s mind: Qing didn’t want to keep his word and give the 15 cities to Zhao at all. So he stepped forward and said, “There is a defect in the jade. Let me point it out to your majesty.”

Once he got hold of the jade, Lin held it with both hands tightly, stepped backward several steps, and stood against a column. Angry, with his hair standing on end and putting his hands with the jade on top of his head as if he was pushing up his hat, he said: “Your majesty wanted the He Shi Be and sent a message to Zhao Wang. Zhao Wang talked about your request with all his ministers. They all said Qin is greedy and is relying on his being strong and powerful. He only wants to extort the jade with vain talk.

“They feared that Zhao would never get the 15 cities promised by Qin, and so they didn’t want to give the jade to Qin. But I think even the common people still keep their word and do not cheat one another. Will not countries like Qin keep their word? It is not a right thing to do to offend the powerful Qin due to a piece of jade. So our Zhao Wang fasted for five days and sent me bearing the jade.

“Zhao Wang kowtowed by offering the jade just to show respect to your majesty, Qin Wang. Now that I have come here, Qin Wang has only received me at a low-level palace and the proper protocol has not been observed.

“Then, when you got the jade, you passed it around to your concubines and attendants, in this way just teasing me. Then I knew your majesty had no intention of giving the 15 cities to Zhao at all, so I got it back.

“If you do force me to give it to you, here and now, my head will be smashed against this column along with the jade! The jade will be broken, and I will be dead.”

After making this speech, Lin stood there holding the jade while looking out of the corner of his eyes at the column, as though he would smash the jade against it.

Qin said very softly he was sorry, fearing Lin would smash the jade. Asking him not to smash the He Shi Be, he called in the officer in charge, checked the map, and pointing from one spot to another, where the 15 cities were he proposed giving to Zhao Wang.

Lin was sure that Qin Wang was pretending, and only wanted to extort the jade without actually giving the cities. So Lin said to Qin Wang: “The He Shi Be is well known to the whole world and is a precious treasure. Zhao Wang didn’t dare not to give it to Qin Wang. Zhao Wang fasted for 5 days before I left. Now, Qin Wang your majesty also needs to fast for 5 days, set up a ritual ceremony in the palace hall, and then I will present the valuable jade to you.”

Qin Wang weighed the situation then, thinking that since they cannot forcefully snatch the jade from Lin, he agreed to what Lin said. Qin settled Lin in the Guang Cheng guest house. Lin was sure Qin Wang would not give the cities to Zhao, so had his attendant put on coarse clothes, and, carrying the jade in his breast, escaped by a small path and returned to Zhao.

Five days later, Qin Wang set up a ritual ceremony at the hall of the palace and held a feast to treat Lin as ambassador from Zhao. Lin came and said: “Your majesty, from the time of Qin Mugong down to you today, 20 kings have ruled over the Qin Kingdom, but none of them has kept his word. I really feared that if your majesty didn’t keep your word, I would do a big wrong to Zhao. So I sent someone back to Zhao overnight with the jade. I am sure he is now there.

“Qin is very powerful, while Zhao is weak. Zhao will certainly hold up the jade immediately to present respectfully to Qin if your majesty just sent a lower level envoy to Zhao. Now with the power of Qin, if Qin gave the 15 cities to Zhao in advance, how should Zhao dare not to give the jade to Qin?

“I know I warrant being killed for my crime of daring to cheat your majesty. I beg your majesty to kill me. I hope your majesty and all your ministers will think and talk about it carefully.”

Qin Wang and his ministers looked at each other and exclaimed sharply. Some of those attendants would pull Lin away to kill him, but Qin Wang said, “If we now kill Lin Xiangru, we still cannot get the He Shi Be. On the contrary, we will cut off the good relationship between Qin and Zhao. We’d rather treat him well and let him return to Zhao. Would Zhao Wang cheat Qin only because of a piece of jade?”

After returning to the Kingdom of Zhao, Zhao Wang thought Lin was a very capable elite person, a scholar. Lin had gone to another country as powerful as Qin as an ambassador, fulfilled the task, preserved Zhao’s reputation, protected Zhao’s treasure, and incurred no shame. So he appointed him as Shang Dafu, a very high official.